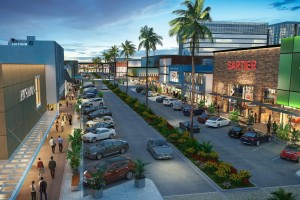 U.S. real estate investment trust Kimco Realty Corp (NYSE: KIM) has acquired from Canada Pension Plan Investment Board the remaining 45 percent interest in the Oakwood Plaza shopping centre and the Dania Pointe development project. The gross price paid was US$299.2 million, including the assumption of US$100 million of mortgage debt. Oakwood Plaza and Dania Pointe are adjacent properties located in Hollywood, Florida.

NEW HYDE PARK, N.Y.–(BUSINESS WIRE)–Kimco Realty Corp. (NYSE:KIM) today announced it has acquired from Canada Pension Plan Investment Board the remaining 45% ownership interest in the Oakwood Plaza shopping center and the Dania Pointe development project for a gross price of $299.2 million, including the assumption of $100.0 million of mortgage debt.

Dania Pointe is a mixed-use, ground-up development project that will include approximately 900,000 square feet of retail stores and restaurants, 1,000 luxury apartments, two hotels totaling 300 rooms and two office towers. Phase I will be a traditional 318,000-square-foot open-air power center with construction expected to begin in the fall of 2016. Phase II will be a lifestyle center featuring 575,000 square feet of main-street retail, residential towers and office buildings; construction for Phase II is scheduled to start at the end of 2017. The Dania Pointe project will benefit from the estimated daytime population in excess of 1 million people within a 15-minute drive time.

This transaction is reflective of Kimco’s 2020 Vision of owning large, high-quality assets in major metro markets in the U.S., while continuing to reduce its joint venture portfolio. Oakwood Plaza ranks second in Kimco’s Top 10 assets based on net operating income (NOI) and, when completed, Dania Point will be the company’s highest NOI producing property.

Transaction activity continues to reflect net selling and accumulation of capital. During the first quarter of 2016, Kimco completed gross transactions totaling approximately $460.8 million including the disposition of 7 Canadian shopping centers as part of the company’s pure-play U.S. shopping center initiative.

Dispositions:
• The company sold interests in seven Canadian shopping centers totaling 1.7 million square feet for a gross sales price of USD $322.9 million, including the assumption of USD $119.7 million of existing mortgage debt. Kimco’s share of the sales price and debt assumption was USD $155.3 million and USD $57.5 million, respectively.
• Kimco sold six U.S. properties, totaling 767,000 square feet, for a gross sales price of $107.6 million. The company’s share from these sales was $103.7 million.
• Kimco additionally sold four land parcels for a gross sales price of $6.1 million. Included in these land sales and as previously announced, the company sold 9.2 acres in Spring, Texas (Houston – The Woodlands – Sugar Land metropolitan statistical area or “MSA”) to the Target Corporation for the construction of a new store to anchor Kimco’s new 450,000-square-foot Grand Parkway Marketplace.

Acquisitions:
• As previously announced, Kimco acquired the remaining 50% ownership interest in the Owings Mill Mall (Baltimore-Columbia-Towson MSA) for $11.5 million. Separately, the company also acquired the parcels owned by J.C. Penney Company, Inc. and Macy’s, Inc. for $5.2 million and $7.5 million, respectively. As a result of these transactions, Kimco owns 100% of the Owings Mills Mall and plans to develop a new open-air center in its place.

Kimco Realty Corp. (NYSE:KIM) is a real estate investment trust (REIT) headquartered in New Hyde Park, N.Y., that is North America’s largest publicly traded owner and operator of open-air shopping centers. As of December 31, 2015, the company owned interests in 564 U.S. shopping centers comprising 90 million square feet of leasable space across 38 states and Puerto Rico. Publicly traded on the NYSE since 1991, and included in the S&P 500 Index, the company has specialized in shopping center acquisitions, development and management for more than 50 years. For further information, please visit www.kimcorealty.com, the company’s blog at blog.kimcorealty.com, or follow Kimco on Twitter at www.twitter.com/kimcorealty.

The statements in this news release state the company’s and management’s intentions, beliefs, expectations or projections of the future and are forward-looking statements. It is important to note that the company’s actual results could differ materially from those projected in such forward-looking statements. Factors which may cause actual results to differ materially from current expectations include, but are not limited to, (i) general adverse economic and local real estate conditions, (ii) the inability of major tenants to continue paying their rent obligations due to bankruptcy, insolvency or a general downturn in their business, (iii) financing risks, such as the inability to obtain equity, debt or other sources of financing or refinancing on favorable terms to the company, (iv) the company’s ability to raise capital by selling its assets, (v) changes in governmental laws and regulations, (vi) the level and volatility of interest rates and foreign currency exchange rates and management’s ability to estimate the impact thereof, (vii) risks related to the company’s international operations, (viii) the availability of suitable acquisition and disposition opportunities, and risks related to acquisitions not performing in accordance with our expectations, (ix) valuation and risks related to the company’s joint venture and preferred equity investments, (x) valuation of marketable securities and other investments, (xi) increases in operating costs, (xii) changes in the dividend policy for the company’s common stock, (xiii) the reduction in the company’s income in the event of multiple lease terminations by tenants or a failure by multiple tenants to occupy their premises in a shopping center, (xiv) impairment charges and (xv) unanticipated changes in the company’s intention or ability to prepay certain debt prior to maturity and/or hold certain securities until maturity. Additional information concerning factors that could cause actual results to differ materially from those forward-looking statements is contained from time to time in the company’s SEC filings. Copies of each filing may be obtained from the company or the SEC.