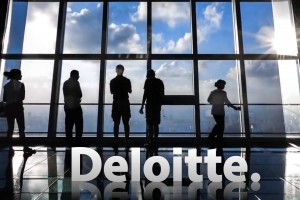 A new survey by Deloitte found that most U.S. corporate and private equity executives expect mergers and acquisitions in 2016 to match or improve on the record disbursement levels of 2015. The third annual Deloitte M&A Trends Report found 87 percent of respondents predicted their organizations would sustain or increase M&A activity in the months ahead, despite the 40 percent drop in U.S. deal volume in Q1 2016. Canada was identified as one of three top overseas markets in which U.S. investors planned to pursue deals. While respondents were “decidedly bullish” about M&A trends, Deloitte also found that economic uncertainty and other factors tempered this optimism.

NEW YORK, May 4, 2016 /PRNewswire/ — Following the biggest dollar year ever for mergers and acquisition (M&A) transactions in 2015, an overwhelming 87 percent of executives at U.S. corporations and private equity firms predict their organizations’ deal volume will continue, or even increase in 2016, according to the findings of the third annual “Deloitte M&A Trends Report, 2016 edition.” This positive market sentiment is despite the 40 percent drop in U.S. deal volume in the first quarter of 2016, compared to the first quarter of 2015.

“While still decidedly bullish on the M&A market for 2016, the results also show some creeping issues that could temper this optimism,” said Russell Thomson, managing partner of Deloitte’s U.S. merger and acquisitions services practice. “For example, although half of private equity investors anticipate an increased number of deals this year, that’s notably less than the 61 percent that foresaw an increase in activity in our 2015 survey. The first quarter’s numbers for deal flow indicate that despite a continued focus on M&A, both corporate and private equity executives may have taken more time to gauge opportunities, assessing the economic climate and other factors before making their moves.”

The annual Deloitte M&A Trends Report provides insights and year-to-year data on anticipated M&A activity, deal dynamics, top sectors and geographies, as well as the factors driving corporate and private equity deal makers as they come off a record-breaking year for M&A. This year’s survey results revealed increases in smaller strategic deals and divestitures, as well as continued appetite for cross-border opportunities, and the use of data analytics.

Seeking smaller strategic deals remains the No. 1 M&A strategy for corporate respondents in the coming year (34 percent) for the third year in a row. Corporate respondents expect the average value of their organizations’ acquisition targets in the next 12 months to be $500 million or under (61 percent), while more than half (55 percent) of private equity respondents expect average target value in the coming year to range from $100 million to $1 billion. This is consistent with private equity clients also looking to do more add-on acquisitions this year.

Corporate divestitures to rise
M&A executives expect more divestiture activity in 2016 – a trend fueled by a greater focus on core business activities and reactions to marketplace changes. More than half of corporate respondents (52 percent) expect their companies to pursue divestitures over the next 12 months – a significant rise from 39 percent just one year ago. Shedding non-core assets (33 percent) continues to be the top reason corporate respondents offer for divesting a business. Financing needs (26 percent) and market change (25 percent) also continue to be important factors for companies pursuing divestitures. The challenging IPO markets are likely further driving the divestiture momentum for both private equity and corporates.

Technology reigns as top sector target
For the third consecutive year, technology is the sector expected to be most active for M&A by both corporate (26 percent) and private equity (25 percent) respondents during the next 12 months. Beyond tech, corporate respondents expect oil and gas (22 percent) and health care (16 percent) to remain hot during the coming year. Private equity respondents say banking and securities (19 percent) will be next busiest in M&A over the next 12 months.

Thomson added, “The convergence of technology across industries is adding a new dimension to deal making. For instance, banks are working to deepen their capabilities by acquiring financial technology firms, automobile companies have turned their attention to connected vehicles, and similar activity is happening in health care. As sectors converge with technology, the strong impacts these deals have on financial markets will continue, and analyzing deal activity will need to evolve to account for the new hybrid sectors emerging.”

The top three overseas markets in which both corporate executives and private equity investors plan to pursue deals are: China, Canada and the United Kingdom.

Execution and integration remain concerns
The M&A trends report showed a significant increase in the share of recent deals that did not meet expectations. Forty-eight percent of corporate respondents said more than half of their acquisitions over the past two years did not generate expected returns. The main reasons transactions failed to generate expected value for the past two years were gaps in execution and integration (23 percent of corporate respondents, 26 percent of private equity respondents).

Conclusion
“On the heels of a record-breaking 2015, the outlook for M&A remains favorable due to a number of converging factors, including a reasonably solid US economy, historically low interest rates and equity markets that are stabilizing,” added Thomson. “But, the slow M&A start to 2016 reinforces that there are a number of factors emerging in 2016 that should be closely watched, including global economic concerns, bouts of financial market volatility, tighter traditional debt markets and regulatory pressures. While we are seeing significant interest and enthusiasm across both corporates and PE firms, and I suspect 2016 will be a tale of two halves, with improvement after a softer start, we will have to wait and see.”

About Deloitte M&A Practice
Deloitte advises corporate buyers and private equity investors throughout the entire M&A deal lifecycle from strategy development to selecting the right partner and from conducting thorough due diligence to closing the deal. Throughout the integration process or through a divestiture, we align our services to address clients’ transactional and integration needs, all with the goal of building value for our clients.