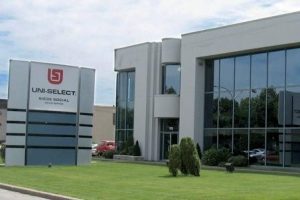 Uni-Select Inc (TSX: UNS) has agreed to acquire Parts Alliance Group Ltd, a British distributor of automotive aftermarket parts with 161 corporate stores and 38 affiliated locations. The deal is valued at about $356 million (£205.0 million) and expected to close in the third quarter of 2017. The seller is U.K. private equity firm HgCapital, which first invested in Parts Alliance in 2012. Uni-Select, a Boucherville, Québec distributor of automotive refinish and industrial paint products and aftermarket parts, said the deal will facilitate its entry into the European market with a leadership position in the United Kingdom.

– Second largest distributor in the UK with 161 corporate stores and a network of 38 affiliated locations covering England, Scotland, Wales and Ireland;

– Entry into European market with a leadership position in the UK;

– Transaction fully funded with debt; and

– Anticipated to be immediately accretive to adjusted EBITDA(1) and adjusted EPS(1).

BOUCHERVILLE, QUÉBEC–(Marketwired – June 1, 2017) – Uni-Select Inc. (“Uni-Select” or “Corporation”) (TSX:UNS) is pleased to announce that it has entered into agreements with a fund managed by Hg Pooled Management Limited and other minority shareholders through which its wholly-owned UK subsidiary will acquire 100% of the shares of PA Topco Limited doing business as The Parts Alliance (“Parts Alliance”), the second largest independent distributor of automotive aftermarket parts in the UK (“Transaction”). The Transaction value is approximately £205.0 million on a cash-free and debt-free basis, subject to working capital and other customary adjustments. The Transaction is fully funded with debt.

“We are excited to establish a third growth pillar in the large UK parts aftermarket that is expected to be immediately accretive in a market with great upside potential from future consolidation opportunities. Parts Alliance is a great organization, with a market leadership position and national scale, a proven growth platform and an experienced management team that has demonstrated its ability to drive profitable growth both organically and through acquisitions,” said Henry Buckley, President and CEO of Uni-Select. “Our two companies are a perfect fit in terms of business profile, customer focus, entrepreneurial culture and commitment to people development.”

Headquartered in Solihull, England, Parts Alliance has grown rapidly in recent years to become the second largest player in the UK automotive aftermarket parts market with an approximate 7% share. It services over 23,000 customer accounts through 161 corporate stores and 38 affiliated locations in its network providing 85% national coverage, and employs more than 2,900 team members. On an unaudited basis, for the fiscal year ended April 30, 2017, Parts Alliance recorded £264.9 million in sales and £17.8 million in operating earnings before interest, taxes, depreciation and amortization and non-recurring costs (adjusted EBITDA(1)). Including the most recent acquisition completed to date, Parts Alliance’s run rate adjusted EBITDA(1) is estimated at £21.0 million, on an estimated £280.0 million in sales. Uni-Select estimates a purchase price multiple of 9.7X based on run rate adjusted EBITDA(1).

The Transaction provides Uni-Select with an attractive point of entry into a new geographic market currently in consolidation with high growth and accretion potential and a third growth pillar to complement its segments, Canadian Automotive Group and FinishMaster US. Continued growth, driven mostly by growing and ageing UK car park is expected.

“We have full confidence that by partnering with Uni-Select, our capability to grow our operations further has significantly increased, all to the benefit of our customers, team members, associates and suppliers,” stated Peter Sephton, President and CEO of Parts Alliance.

Upon closing of the Transaction, Mr. Sephton will join Uni-Select’s executive team while continuing his leadership role in the UK as President and CEO of the European business segment.

The UK automotive aftermarket parts market, estimated at £4.1 billion, is the fourth largest in Europe and one of the most fragmented. Market growth is expected in the coming years, driven mainly by the aging of the car population and mandatory government regulations that require a thorough vehicle inspection for all cars reaching three years of age.

The Parts Alliance team has built a robust foundation for growth, with exceptionally strong leadership, support and customer facing teams, all enabled by solid operational capabilities and technology.

The table below provides combined figures for the last twelve-month period (“LTM”) ended March 31, 2017 for Uni-Select and the fiscal year ended April 30, 2017 for Parts Alliance.

To finance the Transaction, Uni-Select has secured a US$625.0 million fully underwritten commitment from National Bank of Canada, as Co-Lead Arranger and Sole Bookrunner, and Royal Bank of Canada, as Co-Lead Arranger, comprised of a new US$100.0 million term facility and an operating facility up to US$525.0 million, from which facilities an amount will be available and used to finance the Transaction.

Closing is expected to occur in the third quarter of 2017. The terms of the Transaction have been approved by the Board of Directors of Uni-Select and Parts Alliance shareholders and remain subject to customary regulatory approval.

Hg Capital was advised by Baird and legal advice was provided by White & Case LLP.

Today, Uni-Select will host a conference call to review the transaction at 8:00 AM Eastern. Participants may listen to the call via webcast on uniselect.com/investors where a replay will also be archived or by dialing one of the following conference call numbers:

A recording of the conference call will be available shortly after the call until July 1, 2017. To access the replay:

Listeners should allow ample time to access the webcast and supporting slides.

The Parts Alliance is one of the leading groups of automotive parts distributors throughout the UK and Ireland. The group has a network of close to 200 locations including 161 corporate stores and supports over 23,000 customer accounts.

Uni-Select is a leader in the distribution of automotive refinish and industrial paint and related products in North America, as well as a leader in the automotive aftermarket parts business in Canada. In Canada, Uni-Select supports over 16,000 automotive repair and collision repair shops through a growing national network of more than 1,100 independent customers and corporate stores, many of which operate under the Uni-Select BUMPER TO BUMPER®, AUTO PARTS PLUS® AND FINISHMASTER® store banner programs. It also supports over 3,900 shops and stores through its automotive repair/installer shop banners, as well as through its automotive refinish banners. In the United States, Uni-Select, through its wholly-owned subsidiary FinishMaster, Inc., operates a national network of automotive refinish corporate stores under the FINISHMASTER banner which services a network of over 30,000 customers annually, of which it is the primary supplier to over 6,000 collision repair centre customers. Uni-Select is headquartered in Boucherville, Québec, Canada, and its shares are traded on the Toronto Stock Exchange (TSX) under the symbol UNS.