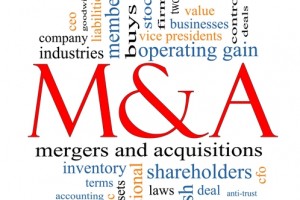 The deal value for PE-backed transactions actually increased during the time period, according to data from Thomson Reuters. It wasn’t just a small bump, but a 68% jump in deal value.

The biggest M&A transaction, Thomson Reuters says, comes from Kraft, which said in August it planned to split self into two.  Since that’s not a typical merger, the next deal in line is Richard Schulze’s $8.3 billion bid for Best Buy Co.

On the private equity side, there were 369 U.S. announced transactions in third quarter, totaling $43.3 billion. This compares to 2011 when 396 mergers were valued at $25.7 billion.

Here’s the top five PE deals, according to Thomson Reuters.

Tallgrass is owned by management,  Kelso & Company as well as a limited group of investors led by The Energy & Minerals Group, including Magnetar Capital.

The fourth largest deal this quarter is Getty Images, a leading supplier of stock photos, video and other digital content.

On Aug. 15, the Carlyle Group announced it would buy Getty in a deal valued at $3.3 billion. The seller is Hellman & Friedman which acquired Getty in a $2.4 billion deal.

Hellman & Friedman invested up to $941.3 million equity in Getty as part of 2008 buyout, according to SEC filings.

An industrial deal comes in third place for the quarter.

BC Partners and the Carlyle Group in July said they were buying Hamilton Sundstrand Industrial from United Technologies Corp. The deal was valued at $3.46 billion. Hamilton Sundstrand makes highly engineered, mission-critical pumps and compressors for the global industrial, infrastructure and energy markets.

Carlyle continued to be very acquisitive in third quarter. In August, the Washington D.C.-based PE firm said it was buying the auto paint unit owned by DuPont for $4.9 billion.

In July, BC Partners and CPP Investment Board unveiled a $6.6 billion deal for Cequel Communications Holdings, which does business as Suddenlink. BC Partners, CPPIB and certain members of Suddenlink management are investing about $2 billion equity, according to a statement. The deal is expected to close in fourth quarter.