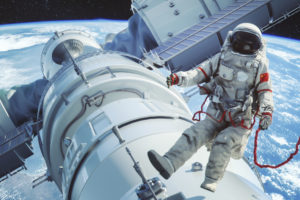 PE Hub has identified half a dozen space-driven PE deals announced over the last few months. Leading the pack is AE Industrial Partners, a Boca Raton, Florida, firm that is actively investing.

Earlier in October, the Space Development Agency awarded York a contract worth up to $200 million to build and operate 12 satellites with experimental military communications payloads, as SpaceNews reported.

“With its innovative spacecraft designs and manufacturing processes, York has revolutionized the small satellite market, which is poised for significant growth in both the government and commercial markets over the next 20 years,” said Kirk Konert, partner at AEI.

2. AEI buys stake in Firefly, leads new round of funding

Back in Feburary, AEI acquired a significant stake in Firefly Aerospace in February from Noosphere Venture Partners LP. In a statement, the acquisition was described as a way to position Firefly for significant opportunities as the company focuses its efforts on “restoring the country’s leadership in the small- to-medium launch market”, while establishing international strategic partnerships to effectively serve the global market.

“AEI believes that leveraging this experience will be a critical advantage as Firefly looks to secure additional US Federal Government contracts,” read the statement.

In March, AEI led a $75 million Series B round in Firefly.

Earlier in October, Firefly launched its Alpha rocket. The company considers it a success, despite its three satellite payloads reentering the atmosphere just days later, as Space.com pointed out.

3. Sierra Space, backed by AEI and BlackRock, teams up with Spirit AeroSystems

Sierra Space is headquartered in Louisville, Colorado, and is backed by a slew of venture capital and private equity firms including General Atlantic, Coatue and Moore Strategic Ventures, BlackRock and AEI.

In May, Sierra joined hands with Spirit AeroSystems, a Wichita, Kansas-based company, for a long-term strategic partnership that is intended to accelerate access to a vibrant commercial space economy of the future.

Tom Vice, Sierra Space’s chief executive, described the deal as a way to increase innovation and efficiencies for the space economy. “Working with Spirit Defense & Space, we will broaden access to tomorrow’s space economy, lowering the cost of entry and increasing the speed to market of Sierra Space’s Dream Chaser franchise. Together we will accelerate the commercialization of space,” he said.

CAES has over six decades of space flight heritage, the company said.

The company “is uniquely differentiated by the breadth of its technical capabilities and segment expertise, as well as its long history of delivering critical solutions to customers,” Veritas chief executive and managing partner Ramzi Musallam said.

Both companies are headquartered in Colorado Springs, Colorado, while Enlightenment Capital is based in Chevy Chase, Maryland.

Acquiring AES will help Boecore deepen its technical capabilities, according to the press release.

“Boecore’s acquisition of AEG comes at a time when there is a critical need for secure and robust satellite communications in space, given an increasingly contested and congested environment,” said Thomas Young, Enlightenment Capital vice president, adding that the firm will continue to invest in Boecore to drive innovation and expand service.

In June, Dallas-based Trive Capitalacquired Custom Microwave Inc as an add-on for its Vitesse Systems platform.

Vitesse, which supplies cooling systems and communication hardware used in radar, electronic warfare and data-transmission applications, is headquartered in Newark, California, and has additional operations in Colorado, Massachusetts, Maryland and Nevada.

“The proliferation of military and commercial satellites has resulted in increased demand for high performance antennas,” said Trive partner David Stinnett. The addition of CMI will enable Vitesse to support a broad range of LEO and GEO satellite programs and related ground-based systems.”

Space exploration is still clearly in the early days, and PE Hub expects to see more activity in space-related transactions in the months and years to come.