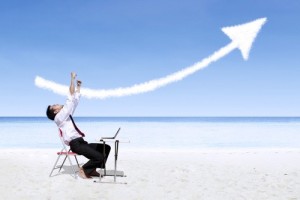 Chicago-based TransUnion went public Thursday. Shares of the company surged nearly 13 percent, or $2.90, to close at $25.40 on the New York Stock Exchange.

The strong first day came after TransUnion raised roughly $665 million on Wednesday when it priced 29.55 million shares at $22.50, near the top of its $21 to $23 price range. Book runners on the deal included Goldman Sachs & Co, JP Morgan, BofA Merrill Lynch and Deutsche Bank Securities. The underwriters have the option to buy another 4.4 million shares via the over allotment option, or greenshoe.

Advent’s and GS Capital’s investment in TransUnion dates back to April 2012 when the private equity firms’ closed their $3 billion purchase of the company. The seller was Madison Dearborn Partners. (MDP had planned to take TransUnion public, but decided to sell to Advent and GS Capital, making 2.25x its money.)

GS Capital, the private equity unit of Goldman Sachs, and Advent invested a combined $1.1 billion of equity as part of the acquisition, SEC filings indicate. Prior to the IPO, each sponsor owned 48.8 percent of the company. Neither firm sold shares in the IPO, but each firm’s stake was expected to fall after the offering to 39.7 percent, assuming the underwriters exercised the greenshoe.

Advent used its sixth international PE fund to invest in TransUnion. Advent International GPE VI LP closed at $10.4 billion in 2008. The pool is producing a 19.3 percent net IRR and 1.8x investment multiple as of Sept. 30, according to the California Public Employees’ Retirement System.

In late 2012, each PE firm got about $200 million back from TransUnion when it issued $400 million in PIK toggle notes to pay a dividend to its shareholders.

Each sponsor owns 72.35 million shares of the company. At Thursday’s closing price of $25.40 per share, each firm’s stake is worth $1.84 billion, or $3.67 billion combined. Including the $200 million dividend each already collected, each sponsor stands to make 3.7x its money.