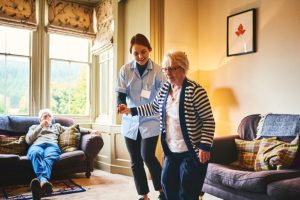 SVB Leerink is running the process, sources said, which kicked off in the last few days. First-round bids are anticipated sometime in late July, with a process expected to comprise largely pure-play private equity firms, they said.

Notably, the process marks one of SVB Leerink’s first sell-side engagements to launch since a series of hires were made to build out its healthcare investment banking practice – with seasoned bankers coming out of Guggenheim, Citigroup, BofA Merrill Lynch, RBC, HSBC and other firms.

Caregivers help elderly, chronically ill or disabled individuals with the activities of daily living in their homes, ranging from personal hygiene to meal preparation, while a smaller piece of the platform offers in-home skilled healthcare services. All services are covered by Medicaid.

All American and S&A operate exclusively in the New York metropolitan area today. Sources say it has the opportunity to gain additional share in NYC and diversify beyond into new counties or states.

The platform is projecting about $35 million in 2021 pro forma adjusted EBITDA, the people said.

A deal could value the business somewhere between 8x and 11x EBITDA, sources said. Given its concentrated geographic presence, the platform is likely to be valued below the about 11.5x EBITDA recently commanded by larger, multi-state assets in unskilled home care.

That includes Help at Home, which Centerbridge Partners and Vistria Group joined hands to acquire a majority ownership of in September, valuing the business at approximately $1.4 billion, PE Hub wrote. In connection with the deal, existing investor Wellspring Capital Management stayed on as a minority investor, sources said.

Home healthcare – skilled and unskilled – has continued to command significant interest from the private equity community, buoyed by seniors’ growing preference to receive integrated care at home. As this trend continues to accelerate, sponsors have remained eager to invest behind opportunities that drive care for patients outside of the hospital – the most expensive setting – thus reducing medical spending.

All American, S&A Unified and SVB Leerink could not be reached on Thursday.