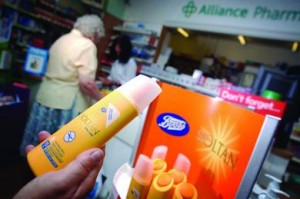 Alliance Boots‘ debt arrangers Deutsche Bank, JPMorgan, UniCredit (HVB), Barclays, Citi, Banc of America, Merrill Lynch and RBS are lining up a deal to sell a substantial senior sub–tranche of the £9.02bn package supporting KKR‘s and Stefano Pessina’s buyout of Alliance Boots. Deutsche Bank, which is co-ordinating the process, would not comment.

A sale requires unanimous agreement from the full arranger group, but sources said that not all of the banks involved would reduce their exposure in the process now under way. A minority of banks would rather hold the assets, which continue to perform, than realise a loss by selling at a discount.

While a deal is under discussion, one investor that wanted to buy paper in size complained of a lack of transparency from the leads. Sources away from the deal said that up to 50% of a £5.05bn term loan B has been prepared for sale. There are also suggestions that an anchor investor is in the process of taking a major position on the £1bn second lien debt.

The senior piece in play has been re–tranched into three more easily digested sub–tranches, one of which will be sold down in the immediate term. A piecemeal syndication aimed at long-only investors should reduce the risk of the deal plunging in potentially volatile secondary markets.

Credit prices have gained significantly since the early part of the year and leveraged credit has seen a substantial rally in recent weeks. The cost of five-year LCDS protection for Alliance Boots has fallen from 822.5bp mid on March 17 to 590.5bp on Wednesday last week.

First-quarter results from a host of crossover and high-yield issuers have also been positive, and while Alliance Boots has no leveraged peers it is understood to have performed well as a credit since the deal was structured 10 months ago.

Even the slightest price fluctuation is intensely sensitive for sellers. With billions in play every percentage point of discount offered represents hundreds of millions of pounds. For investors the reverse is true.

“For an over-leveraged deal with poor covenants, 91 or 92 is not the right price. The return on this kind of investment comes from the discount. If I can buy a deal at 88, then I am not worried about the loan being called,” said one investor.

Arrangers are understood to be prepared to address the bid–offer spread by offering investors substantial leverage to finance the sale, a move welcomed by one arranger.

“It’s a great business, if I can get four times leverage then I’m prepared to go big. But I’m a lot less keen otherwise, without most favoured nation status there is lot of uncertainty about where later tranches will come out,” he said.

Most favoured nation status offers investors protection over a set period, reimbursing them if later portions of the same loan are sold for less.

The Alliance Boots deal was originally structured on the cusp of the credit crunch, launched in June 2007 and pulled from syndication a month later at a point when liquidity was in perilously short supply.

Investors say that is no longer the case. “The liquidity issue has receded. Arrangers could shift all of Boots now, at the right price,” said one.

The recent surge in liquidity is essentially a result of a series of credit opportunity funds being raised by mainly US-based private equity firms. Such funds have already picked over much of the US overhang and are likely to focus any European activity on sizeable deals where large tickets are available in very large financings.

One European investor cited Apollo and Blackstone as the likely Alliance Boots buyers. Another investor said that there appeared to be a bias among the arrangers to move very large positions to a small number of investors, rather than a broadly based sale.

Speculation also suggests that KKR Finance, a debt investor with links to the equity sponsor, could also be a buyer – a prospect that one investors said could create a conflict of interests.

“As an investor, that makes me nervous, especially in this type of situation where a sponsor will have effectively promised two sets of investors an equity return on a deal from both equity and debt,” said one source.

Other investors are unperturbed. “First of all I understand we are not talking about the same sponsor in relation to Boots,” said one. “And regardless, whether an investor is linked to sponsors or not is irrelevant. Funds’ investment managers have a fiduciary duty to their investors and will act just like another investor.”

Sponsors contributed £2.04bn of equity for 59.48% of the business, while seven of the MLA banks provided a £1.39bn “equity bridge” for a 40.52% non-voting shareholding, which they also intended to syndicate.

There is a consensus across most of the market that slashing the overhang needs to be a priority for banks, and is fundamental to reigniting the LBO debt market.

Furthermore, while most will welcome a successful sell-down of Alliance Boots, the deal is too much of an anomaly to be a true test or barometer of the market. The behind closed doors sell-off, which appears to be under way, is unlikely to set a precedent for future deals.

Unless some clarity emerges on just how the terms of a deal are arrived at, and who has and has not been invited to take part in the process, there is little chance of the wider market taking confidence from even a successful sale.