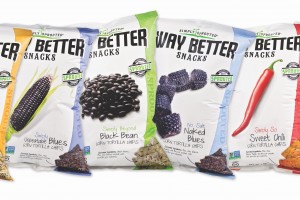 Financial terms of the deal, which closed May 29, weren’t announced.

Live Better is known for its Way Better Snacks brand of crackers and natural tortilla chips that come in various flavors like Sriracha, Black Bean and Sweet Potato. Way Better tortilla chips and crackers are certified gluten free, kosher, use non-GMO ingredients and do not include MSG, trans fats or high fructose corn syrup. The snacks even use “sprouted” beans, grains and seeds which claims to enhance nutrition as well as aid in digestion

“We got them all,” said Founder and CEO Jim Breen. “And they taste great.”

Breen wouldn’t disclose Live Better’s revenue. The company employs a staff of 19. A veteran sales executive (he’s worked for Best Foods, Borden and was a Senior VP of sales with The Hain Celestial Group), Breen founded Live Better in 2011. In fact, it was Breen and a small group of associates who came up with the original recipe for Way Better’s tortilla chips that year.

The “better for you” food sector has seen some large deals recently.

WhiteWave Foods Co. on June 9 said it agreed to buy Vega, a provider of plant-based powdered shakes and snack bars, for about $550 million cash. Last week, Permira said it would acquire Medora Snacks and Ideal Snacks Holding Corp., which make “better for you” popped snacks and PopCorners.

“There is absolutely a big market for [natural foods],” Breen said. “This is not a niche business.”

Minneapolis-based Live Better conducted a “friends and family” round of funding in early 2012, said Breen, who wouldn’t disclose how much it raised. This time around, the company chose to sell to a private equity firm because it’s “ready for the next phase of growth,” Breen said. ACG is the company’s first institutional investor, he said. Breen himself does own a stake but he wouldn’t reveal how much he has of Live Better.

Breen has known the ACG executives for several years but talks between the two only became serious six months ago, he said. “ACG has a terrific track record of helping companies like us grow and develop,” he said. “We can’t do it alone.”

The ACG investment was not an auction although Janica Lane, of Piper Jaffray, did advise Live Better on the deal. ACG didn’t use an outside banker.

Live Better plans to use proceeds to expand its sale infrastructure and distribution as well as build brand awareness, Breen said. They’ve already hired Barney Acselrod, who previously worked at Snapple Beverage Corp., Vitamin Water and PopChips, as their executive VP of sales. Live Better has plans to add a number of sales associates, Breen said. “With ACG we will grow into a nice brand,” he said.

ACG, which provides minority growth capital to consumer, retail and restaurant companies, has a “significant” stake in Live Better, said Trevor Nelson, a managing partner. Nelson wouldn’t disclose specifics but said the deal is in line with New York-based private equity firm’s investment parameters. ACG typically invests from $5 million to $15 million equity per deal in companies with at least $5 million to $25 million of annual sales, he said.

Live Better is doing something novel, Nelson said. “They are offering the highest quality and most delicious tortilla chip,” Nelson said. “It’s also healthier and better for the consumer. It’s pretty rare to find that in any category.”

The Live Better deal is similar to ACG’s investment in Krave Jerky, said Julian Steinberg, an ACG managing partner. ACG closed the sale of its minority stake in Krave Pure Foods, which makes Krave Jerky, to The Hershey Company in March. Hershey realized that Krave, which offers jerky made from natural beef, pork or turkey in different flavors, was “revolutionizing the meat snacks category,” Steinberg said. ACG made more than 6x its money with the Krave Jerky sale, peHUB has reported.