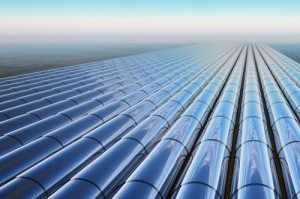 German insurer Allianz SE and Borealis Infrastructure, the infrastructure investment arm of Ontario Municipal Employees Retirement System, have completed their previously announced acquisition of Czech gas pipeline operator Net4Gas s.r.o. The company was sold by Germany’s RWE Group. The joint venture deal, which has been valued at 1.6 billion euros (US$2 billion), including debt, will see Allianz and Borealis each own a 50 percent stake in Net4Gas.

MUNICH, GERMANY and TORONTO, ONTARIO–(Marketwired – Aug. 2, 2013) – Allianz and Borealis Infrastructure are pleased to confirm that the previously announced acquisition of NET4GAS, s.r.o. by their joint venture holding company completed on August 2, 2013.

Allianz and Borealis Infrastructure, the infrastructure investment arm of the Ontario Municipal Employees Retirement System (OMERS), will each own a 50 percent stake in NET4GAS.

NET4GAS owns and operates a network of more than 3,600 km of high-pressure pipelines that both supply the Czech domestic market and transit natural gas through the Czech Republic to markets across Europe. NET4GAS is a provider of key infrastructure for the transport of gas in Europe, transporting approximately 35 billion cubic meters of gas each year.

“Borealis is very pleased to have completed its first investment in the Czech Republic. NET4GAS strongly augments our existing holdings in the energy and transportation sectors in the U.K. and Europe. This investment directly fits with our strategy of acquiring, owning and managing large-scale, stable infrastructure assets over the long term,” said Michael Rolland, President and CEO of Borealis Infrastructure.

“NET4GAS is of great importance to the Czech Republic and to Allianz’s infrastructure portfolio. We look forward to working together with all relevant stakeholders in the implementation of our strategy to strengthen security of supply and develop a liquid gas market in Central and Eastern Europe with NET4GAS at its core,” said Jaroslava Korpanec, Managing Director of Allianz Capital Partners.

Allianz Capital Partners (ACP) is the captive, alternative asset platform of Allianz Group with assets under management of about 8.5 billion euros. ACP’s investment strategy is driven in particular by matching the long-term obligations of the Allianz Group’s life insurance businesses with assets that generate long-term, stable and inflation-protected cash flows provided, for example, by investment opportunities in the infrastructure and renewables sector.

Together with its customers and sales partners, Allianz is one of the strongest financial communities. Around 78 million private and corporate customers rely on Allianz’s knowledge, global reach, capital strength and solidity to help them make the most of financial opportunities and to avoid and safeguard themselves against risks.

Borealis Infrastructure is a leader in direct infrastructure investing with over a decade of investment experience. Borealis manages approximately CAD 10 billion in OMERS equity capital through investments in a diversified portfolio of large-scale infrastructure assets exhibiting stability and strong cash flows, in sectors including energy, transportation and government-regulated services. It has offices in Toronto, London and New York. Borealis is the infrastructure investment arm of OMERS, one of Canada’s largest pension funds with net assets of more than CAD 60 billion and a AAA credit rating. For more information please visit www.borealis.ca or www.omers.com.