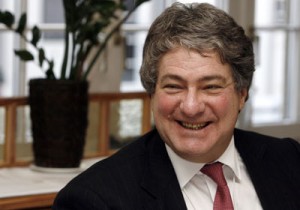 (Reuters) – Apollo Global Management LLC (APO.N) on Friday became the latest private equity group to report lower fourth-quarter earnings because of the way it accounts for profits, even as the cash flow from its share of investment profits more than tripled.

Private equity groups make a living by buying companies, working to bolster their profits, and then booking gains when they sell them. While they own these companies, or hold stakes in them, their profits on paper also depend on their value.

Like peers Blackstone Group LP (BX.N) and KKR & Co LP (KKR.N), Apollo has seen its private equity assets hit by market turmoil because the fair value of its funds is affected by publicly listed stakes it holds as well as the performance of listed companies in the same sector as unlisted firms it owns.

Lower valuations of its funds translate into lower paper profits because carried interest — Apollo’s share of the investment profits of its funds — is accrued in part based on estimates of what assets would be worth if sold.

This in turn weighs on economic net income (ENI), an accounting measure of the firm’s profitability. ENI fell to $357 million in the fourth quarter from $926 million a year earlier.

After-tax ENI was 80 cents per share, down from $2.52 a year ago. Analysts in a Thomson Reuters poll were expecting after-tax ENI per share of $1.41.

“We generated a record $645 million of realized carry revenues in 2011, which demonstrates the value of our integrated investment platform, particularly amidst challenging market conditions,” Black, Apollo’s chief executive, said in a statement.

The realized carry in the fourth quarter was driven by the sale of Parallel Petroleum to Samsung C&T Corp (000830.KS) for $772 million, the divestment of Connections Education to Pearson PLC (PSON.L) for $400 million and a special dividend of $4.50 per share by LyondellBasell.

Apollo, which went public last year in a $565 million initial public offering, is one the private equity industry’s most prolific corporate credit investors and its capital markets portfolio is set to overtake its private equity assets in size.

Apollo agreed to buy debt investor Stone Tower Capital LLC last December. Once the deal is completed in April, Apollo will boost its assets under management by $18 billion. Apollo had $35.4 billion in private equity assets and $31.9 billion in capital market assets as of the end of December.

Credit investments, on average, yield lower returns than buyouts but investors often prefer them on a risk-adjusted basis and Apollo has also often invested in distressed debt situations with an eye to clinching a company’s equity.

By December 2011, Apollo had returned to investors in its private equity funds $38.6 billion on committed capital of $35.9 billion. On $6.1 billion of committed capital to its capital market funds it has returned $4.3 billion, according to the firm.

Apollo declared a fourth-quarter distribution of 46 cents per Class A share, bringing its 2011 dividend to $1.12. Apollo shares traded down 4.3 percent at $14.68 on Friday morning, while broader market was lower by about 1 percent.