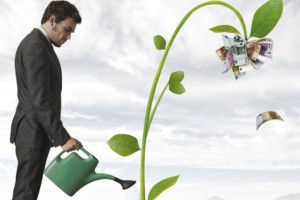 (Reuters) – Apollo Global Management LLC reported a 95 percent rise in quarterly earnings, as strong gains in private equity profits, driven by asset sales, more than compensated for a drop in income in its credit investment business.

Apollo shares started trading on Friday at an all-time high of $23.95 and were up 3 percent in the afternoon, adding to a 47 percent rise in the last 12 months versus a 12 percent rise for the S&P 500 Index .INX.

Credit investments, such as non-performing loans, distressed debt and fixed income, now account for more than half of Apollo’s assets, but it was private equity that put in a strong showing in the quarter as the firm sold stakes in companies.

“Our results for the fourth quarter of 2012 completed an outstanding year for Apollo and we believe further demonstrate the significant earnings and cash generating power inherent in our integrated global investment platform,” Apollo co-founder and chief executive Leon Black said in a statement.

“Results from Apollo this morning highlight what has been a very strong fourth quarter of 2012 for the group so far. We continue to see value across the space as marks move higher and realization activity continues to pace at a healthy rate,” Barclays Capital analysts wrote in a note.

Apollo’s private equity business was boosted by the sale of stakes in chemical producer LyondellBasell Industries NV (LYB.N) and cable operator Charter Communications Inc (CHTR.O), as well as a special dividend from LyondellBasell.

In the fourth quarter it also booked its $975 million sale of retailer Smart & Final Holdings Corp to Ares Management.

The New York-based alternative asset manager said on Friday economic net income (ENI), a measure of profitability that takes into account the mark-to-market valuation of its assets, was $696.9 million in the fourth quarter, up from $357 million a year ago.

This translated into after-tax ENI per share of $1.69 versus the average estimate of $1.05 of analysts in a Thomson Reuters poll.

While the credit business delivered more cash from carried interest in the fourth quarter of 2012 compared with a year ago, the value of its portfolio failed to appreciate more than it did last year, leading to a 36 percent drop in its ENI.

Cash delivered from carried interest, Apollo’s slice of its fund profits, was $562 million across all segments, up from $278 million in the fourth quarter of 2011.

Apollo is currently marketing Fund VIII, a buyout fund whose $12 billion target makes it the largest private equity fund now in the market by targeted size alongside Warburg Pincus Private Equity XI, which is also seeking up to $12 billion.

Apollo did not provide an update on Friday on Fund VIII’s status, but pointed to the completion of fundraising in December in two other funds, which helped the firm grow its assets in 2012, even as it returned $11 billion to its fund investors.

A blot for Apollo was its budding, and loss-making, real estate business, which still has only $8.8 billion of assets. It posted an economic net loss of $2.1 million in the fourth quarter, albeit less than the $15.4 million loss a year ago.

Apollo was founded in 1990 by Black and former Drexel Burnham colleagues Joshua Harris and Marc Rowan, and went public in March 2011.

With a net worth estimated by Forbes at $3.5 billion as of the end of September, Black, 61, is a prolific art collector and was revealed last year as the mystery buyer who paid a record $120 million for Edvard Munch’s masterpiece “The Scream.

Apollo declared a distribution of $1.05 per share for the fourth quarter, bringing full-year distributions to $1.94 per share.