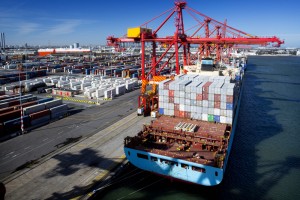 Australia’s Asciano Ltd (AIO.AX) on Tuesday agreed to a A$9.1 billion (US$6.8 billion) buyout by two global consortia after a seven-month bidding war for the port and rail giant, although doubts persist over anti-trust and foreign ownership issues.

For China, the transaction fits with Beijing’s efforts to amass freight transport lines from Asia to Europe to secure global supply chains as its economy sputters at its slowest growth rate in 25 years.

Even so, the deal still needs clearance from regulators in Australia, New Zealand and Europe, including Australia’s competition watchdog and its Foreign Investment Review Board, which will check that Chinese ownership of rail assets is in the national interest.

Qube announced an A$800 million equity raising to pay for the deal, with Managing Director Maurice James saying it was the “most commonsense resolution” after Qube and Brookfield had butted heads with rival bids for months.

Canada’s Brookfield initially planned to buy the whole business and combine its existing railways with Asciano’s until the Australian Competition and Consumer Commission raised objections on anti-trust grounds.

Under the deal structure revealed on Tuesday, Brookfield would split a 50 percent stake in the ports business with Singapore’s GIC Private Limited, British Columbia Investment Management Corp and the Qatar Investment Authority, while Qube would get the other half. Brookfield declined comment on Tuesday.

The new structure of the transaction cements a victory for Qube Chairman Chris Corrigan, who ran the Asciano port unit for 16 years until he was forced out by a hostile takeover. He has been trying to build a new dominant port operator and never wanted Asciano’s non-port assets.

Asciano shares rose 1.2 percent to A$8.99, below the A$9.28 offer price, amid investor jitters over the regulatory hurdles. Qube shares were in a trading halt.

“There’s always a risk, but they seem to have addressed most of the issues that have been put forward in the past,” said one analyst, requesting anonymity because he had not yet published research on the deal.