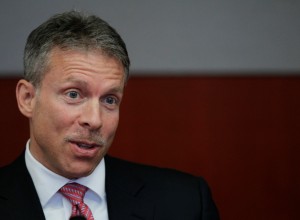 (Reuters) – Bain Capital LLC is considering raising $6 billion to $8 billion for a new global buyout fund and offering investors up to three options on fees it charges to manage the money, according to two people with direct knowledge of the matter.

Bain’s last global fund, Fund X, launched in 2007, raised $10.7 billion and is about 70% invested. Aiming for a smaller fund now reflects the post-financial crisis reality for private equity firms, which have seen both the universe of investors in buyout funds shrink and the existing investors cut back on their allocations to private equity.

In a bid to attract more investors in such an environment, Bain, which was once headed by Republican U.S. presidential candidate Mitt Romney, is toying with the structure of fees it charges limited partners — pension funds, endowments, sovereign wealth funds and other investors in buyout funds, the sources said.

The firm is considering lowering the fee it charges to manage investor money while taking a bigger chunk of the profits from investments, also known as carried interest, betting that some investors would see that as better alignment of interests — Bain makes money when they make money.

Private equity firms have historically used the 2/20 fee structure, charging a 2% fee to manage the assets and 20% carried interest. The carried interest kicks in once the profits reach a certain rate of return, called the hurdle rate.

Seeking feedback from investors, Bain has discussed charging as little as 0.5% in management fees and applying a hurdle return rate as low as zero for its 11th buyout fund, Fund XI, the sources said. Bain may still ask for a 30% carried interest rate as it targets investors willing to pay more for incentive compensation in exchange for lower management fees.

The move to toy with the structure of fees, however, could create fresh headaches for Bain’s publicly traded rivals such as Blackstone Group LP (NYSE: BX) and KKR & Co. LP (NYSE: KKR), which increasingly depend on management fees to pay dividends to shareholders.

Last year, Blackstone relied on fees for 82% for its dividend payouts, KKR for 46% and Apollo Global Management LLC (NYSE: APO) for 25 percent.

“This will put downward pressure on fees. Investors are more happy to pay carry, which is incentive-based, than pay management fees,” said Steven Kaplan, a finance professor at the University of Chicago who specializes in private equity.

Bain’s move to consider different fee structures also comes as it tries to diversify the group of its limited partners beyond endowments, foundations and wealthy families, which together constitute about 65% of its pool of investors. The firm is hoping that giving investors options on fees would help it attract more pension funds and sovereign wealth funds, some of which are wary of overpaying for management fees.

The private equity group is close to reaching its $2 billion fundraising target for the second Asian fund, with final fundraising close expected within a few weeks, one source added.

The fundraising effort was also helped by the performance of Bain Capital Asia Fund I, a $1 billion fund launched in 2007, which is currently valued at about 1.4 times its cost, that person added. The fund has been boosted by deals such as the sale of Feixiang Chemicals in China to specialty chemical producer Rhodia, in which Bain made four times its money.

Investors were about evenly divided in their choice of fee structures in Bain Capital Asia Fund II, the source said. This is because they are asked to take a view on the fund’s performance, as higher gains would pay more carried interest.

Kaplan said investors may not necessarily end up much better or worse off and that performance was key.

“Based on average returns, moving from 30% carry to 20% carry is about the same as cutting 100 basis points on the management fee, so not much difference between 1.5/20 and 0.5/30 other than the incentive to perform,” Kaplan said.

Bain may start fundraising as early as this summer for Fund XI, the sources said.

Taking into account co-investments — money coming from a supplemental fund that invests in deals — Bain has told investors the offering could reach $8 billion to $9 billion, compared with the total $12.7 billion for its previous buyout fund, Fund X, they added. Excluding co-investments, the core Fund X vehicle was $10.7 billion.

Bain Capital Fund XI will also receive an outsized commitment from Bain itself to demonstrate strong alignment of interest with investors, one source said. About 15% of commitments in Asia Fund II are from Bain Capital employees.

The firm has made no final decision on the target size of Fund XI, its fee structure, the co-investment component or the launch date for the fundraising, the people said.