Bain & Co and data solutions provider CEPRES have launched DealEdge, a due diligence tool for private equity dealmakers that improves transparency in an otherwise opaque industry.

The digital advisory product sources data directly from GPs on more than 82,000 portfolio companies and 8,082 funds. CEPRES Founder and CEO, Daniel Schmidt touts industry participation as the key differentiator between DealEdge and other data providers.

“Others have access to publicly available data; our data is sourced directly from the GPs,” Schmidt said. 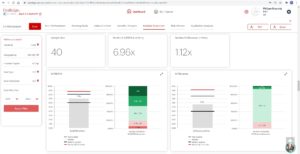 Bain & Co has been working with CEPRES to incorporate data and analysis in its client reports for years. But DealEdge is the first effort to produce a subscription-based platform delineating the performance of private market deals.

“Private equity is the last frontier when it comes to data and market intelligence,” said Brenda Rainey, managing director at Bain & Co, who drove the partnership. “At the end of the day what it [DealEdge] does, is lead to smarter investment decisions based on risk-return profile.”

CEPRES’ almost 20 years’ worth of private equity experience helped lay the foundation for the new product. The data service provider has a live network of GPs who contribute to its intelligence platforms, with DealEdge building on that as it is specifically made for deal teams.

“Obviously, deal teams could always come to CEPRES,” Schmidt said. “But what they didn’t have was this data analyzed in a way [by Bain & Co] that’s easily consumable and can help them present to banks for loan underwriting.”

The analysis of aggregated data is based off Bain’s years of due diligence experience.  For Bain’s Rainey, this analysis unlocks the value of data.

The knowledge of what has been bought and sold in specific sub-sectors, and more specifically, knowing the value created through revenue growth, improved margins and other operating metrics is powerful, Rainey said.

DealEdge is available to all market participants beyond the clients of the two firms. The platform charges an annual subscription fee and enterprise licenses are also available, Rainey told PE Hub.

Technically speaking, DealEdge runs on the confidentiality of the data. The platform doesn’t show information broken down by deals but aggregates it by sub-sectors, providing transparency and making specific investments untraceable.

“The reason they [GPs] participated is to service the need for data to show LPs performance of deals. That helps in fundraising and to build investor relationships,” Schmidt said.

According to a report by Datasite, a leading SaaS provider for the M&A market, 72 percent of 507 PE dealmakers surveyed globally see due diligence as the most time-consuming stage of M&A. Tools like DealEdge, which showcases how multiples expand from entry to exit, can help.

Until now, getting to this level of transparency was not possible, said Rainey.

Correction: This article was corrected to fix several instances of misidentifying the data product, which is called DealEdge. Also, a paraphrase was adjusted to better reflect the source’s meaning. The report has been updated.