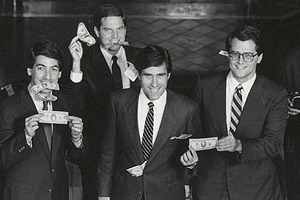 No matter how much Bain Capital might stick out like a sore thumb between now and the 2012 elections, one thing is for certain: the PE firm has consistently been ahead of asset class trends, as evidenced by its trajectory through the 1980s right up until today. Unfortunately, Bain’s former leader has been turned by so many media outlets into its de facto poster boy for evil, the GOP and cut-rate taxes. Still—as was evidenced by reporting from Reuters earlier this week—Bain Capital knows how to stay ahead of the curve.

The private equity firm is once again keeping ahead by offering limited partners varying levels of exposure to its performance. By slashing management fees to as low as a half percent, Bain is incentivizing its investors to under-pay them up front for over-performance they feel certain they will execute.

It is something limited partners are increasingly growing to expect. Although terms were never publicized, sources indicated that some of the mega-commitments being made by pensions and sovereign wealth funds to large-cap private equity firms come with reduced terms for managers. Along with Bain, reports of Providence Equity and BC Partners discounting terms had previously emerged.

At a time when the biggest LPs are trying to reduce the manager headcount in their portfolio, it appears smaller firms need to court even the smallest investors with better terms in order to complete funds.

I spoke with a limited partner at Thomson Reuters’ PartnerConnect last week who said middle market and venture capital firms are increasingly offering (or, at least, accepting) reduced management fees. Many aren’t exactly thrilled about it, he added.

“You won’t get it [flexible management fees] unless you ask for it,” he said. “But it is much easier to get now than, say, two years ago.”

Who will step up and bite the bullet first—and, at what cost to managers? It is perhaps a cruel irony that the very question so many private equity firms’ portfolio companies’ employees have faced, is being posed to some of the middle market firms themselves: would you rather work for a little less, or not make anything at all? There are also plenty of VC firms out there that are hurting for cash, and might miss their target. Although top-quartile VCs have been able to nail down oversubscribed funds left and right, other firms should consider—and some may well already be offering—new terms.

Many limited partners (and, successful GPs) have said the industry is due for consolidation—by up to 40%, depending on whose estimate you’re willing to believe—and that regardless of how they restructure fees, some PE and VC shops are going away for good.

“It is inevitable,” said Colin Ambrose, Chief Investment Officer of UJA-Federation of New York, speaking at Thomson Reuters’ PartnerConnect conference last week. “But it is good for the industry.”