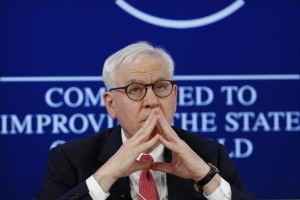 The Blackstone Group’s Joe Baratta and The Carlyle Group’s David Rubenstein didn’t always see eye to eye during separate keynote talks at Harvard Business School on Feb. 9, most notably on the question of whether global or regional funds are the way to go.

But both mega-firm executives see challenges in the market, with Baratta pointing to uncertainty over the impact of central banks curtailing their intervention in the credit markets and Rubenstein pointing to competition for deals. Both discussed promising, multi-year investment opportunities unfolding in energy and in emerging markets. Both expressed faith that buyout firms have proven their worth to investors: Rubenstein said it’s time to stop calling private equity an “alternative” asset class and to instead label it “mainstream.” And they both struck notes of humility. In fact, for a billionaire Rubenstein may have set a record for self-deprecation.

Interviewed by Josh Lerner, a professor at Harvard Business School, Baratta, global head of private equity at New York-based Blackstone Group, talked about the advantages of managing a single global pool of capital. Having a global fund gives the firm, which has offices in Asia, Europe, and the United States, the flexibility to turn up the burner in markets where it anticipates generating the best risk-adjusted return, while turning it down in less attractive markets.

The firm doesn’t need to be the leader in any given market, said Baratta to an audience of students, investors and service providers at the school’s 20th annual venture capital and private equity conference. “To us it’s not some sort of arm’s race.”

Standing on the same stage later in the day, but without an interviewer, Rubenstein discussed his firm’s opposite though also successful strategy. Carlyle Group manages a family of funds, many of them earmarked for different regions and countries, such as Europe, Japan and Mexico. Introducing a fund family might not strike his audience as “brilliant,” Rubenstein said, given the resemblance to many mutual fund families. But at the time the firm got started in 1987, he said, giving investors a choice marked a departure from the approach taken by the established New York buyout shops–as was the Washington, D.C.-based firm’s early focus on companies that did business with the government.

Areas of agreement between Baratta and Rubenstein were plentiful. Neither saw smooth sailing for mega-firms in the months ahead. Baratta said “no one is smart enough” to predict the impact of the Federal Reserve’s easing up on its bond-buying program. If interests rates were to rise, companies won’t sell for the same multiples they’re commanding today. Blackstone Group is only buying companies today where the yield looks attractive on an unlevered basis, Baratta said. ”That’s our true north of investing.” For his part, Rubenstein pointed to higher prices, along with heavy competition for deals, higher equity contributions and the slowing pace of growth in developed markets as challenges. “The returns will come down,” he said.

The two speakers also agreed that there is good money to be made in energy. Today, as for the last seven to eight years, Blackstone Group believes energy to be one of the few global sectors with ”enormous demand for capital” that isn’t easily met by public debt and equity markets. Baratta mentioned several recent energy projects financed by the firm, including the building of a natural gas liquefaction plant in Louisiana and a hydroelectric power station in Uganda; a wind farm in Mexico is on tap, he said.

Carlyle Group’s Rubenstein observed that investing in renewable sources of energy might help folks get into Heaven. But, he said “nothing is as attractive to me as carbon-related energy,” which he called “very efficient.” Rubenstein said that carbon-related energy would fuel growth in emerging markets, leading to investment opportunities in drilling, transportation and refining.

Both keynote speakers discussed the potential for generating good returns in emerging markets. Baratta said his firm continues to be active in India and China, and that it is evaluating Eastern Europe.

He tinged his remarks with caution, questioning whether sponsors have been adequately compensated over the last decade for the risks of investing in emerging markets. These include unpredictable currency fluctuations and the lax rule of law in some countries. Baratta said that Blackstone Group has exited just a few of its portfolio companies in India.

“There’s an inability to exit” in that country, he said. “There’s no liquidity in the capital markets.” (In a follow-up interview Baratta described the firm’s Indian portfolio as having a number of promising companies though representing a relatively small total investment.)

Rubenstein pointed to three emerging markets with particular promise. China, he said, has several times the population of the United States while growing its economy at high single-digit rates. He called the country “very welcoming” of private equity, and said the leaders there believe that sponsors bring important skills to the country. Sub-Saharan Africa, he said, has a population of 800 million people, younger on average than many areas of the world, while seven of the 10 fastest-growing economies are located there. Rubenstein, renowned for his wit, called Europe, with a GDP greater than that of the United States, the “largest emerging market” in the world because it’s so ”beaten down.”