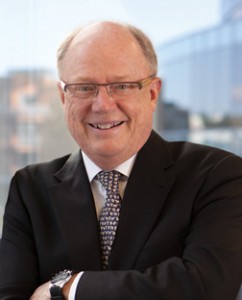 Doug Pearce, CEO and CIO of British Columbia Investment Management Corp. (BCIMC) has decided to retire in 2014, following 25 years with the Victoria-based public pension fund manager. Pearce will continue to lead BCIMC until the board of directors have named a successor, which is expected to happen by March 31, 2014. During Pearce’s tenure, assets managed by BCIMC grew from $15.9 billion (1988) to over $100 billion (2013), and investments were widely diversified to include a high proportion of global alternative assets, including infrastructure, private equity and real assets.

Victoria, B.C., August 27, 2013 – bcIMC’s board of directors today announced that the company’s chief executive officer and chief investment officer, Doug Pearce, has decided to retire from his position in 2014, starting an orderly leadership transition over the next seven months. Pearce’s decision to retire will bring to a close a remarkable career of nearly 35 years, of which 25 years involved leading the investment of the assets of British Columbia’s public sector pension plans.

“Doug Pearce’s leadership has been strong and he has successfully managed bcIMC through many challenging times and events within the capital markets,” said Rick Mahler, chairman of the board. “Doug’s vision led to the establishment of bcIMC and he went on to create a company with an international reputation of being a prudent, ethical and responsible investor that is held in high regard by our peers and partners. The Board is grateful for Doug’s distinguished tenure as CEO/CIO over the last 25 years.”

“I’ve been privileged to lead bcIMC, one of Canada’s largest institutional investors, and know that our responsible approach to investing plays a crucial role in securing the long-term financial obligations of our clients,” Pearce said. “After 25 years, it is time to move on and allow bcIMC to transition to a new generation of leadership that will continue to provide the long-term view that is the foundation of our business. I look forward to working with Rick Mahler and the board during the recruitment and to assist with the transition to bcIMC’s new executive leader.”

The board of directors will conduct a process to select and appoint Pearce’s successor and will consider internal and external candidates with the assistance of a leading executive search firm. The board anticipates completing the recruitment process by March 31, 2014. In the event that the recruitment process extends beyond March 2014, Pearce has agreed to stay on and continue to lead bcIMC until the recruitment and transition is completed.

During Pearce’s tenure as bcIMC’s CEO/CIO:
• Assets under bcIMC’s management have grown from $15.9 billion (1988) to more than $100 billion (2013)
• Over a 20-year period, bcIMC has generated $3.2 billion in value for its pension plan clients – over a 20-year period, the annualized return for combined pensions was 7.9 per cent against a benchmark of 7.6 per cent
• bcIMC has transformed its investment focus from being a holder of Canadian bonds and stocks to an investor with a globally diversified portfolio, an investor in infrastructure, renewable resources, and mortgages, an active developer of real estate, and a thematic investment program
• bcIMC has steadily increased its clients’ exposure to real assets – notable transactions include: Transelec, Chile’s largest electricity transmission company (2006); Canadian Hotel Income Properties Real Estate Investment Trust, now SilverBirch Hotels & Resorts (2007); Delta Hotels Limited (2007); Puget Energy, Washington state’s oldest and largest energy utility (2009); TimberWest Forest Corp. (2011); Canada Post site in downtown Vancouver(2013); Open Grid Europe (2013)
• bcIMC was one of the founding signatories of the UN Principles for Responsible Investment – bcIMC has gone on to play a leadership role in the area of responsible investing, and most notably with Doug Pearce serving as chair of the Canadian Coalition for Good Governance from 2006 to 2009

About bcIMC
bcIMC is an independent investment management corporation with a globally diversified investment portfolio of more than $100 billion as at March 31, 2013. Based in Victoria, British Columbia and supported by industry-leading expertise, bcIMC invests in all major asset classes including infrastructure and other strategic investments. bcIMC’s clients include public sector pension plans, public trusts, and insurance funds. For more information, visit www.bcimc.com