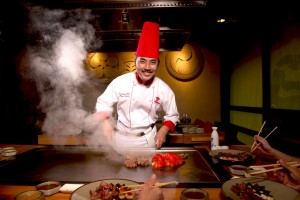 Restaurants deals continue to sizzle, but the latest isn’t quite done cooking.

This morning, Benihana said it has agreed to sell itself to Angelo, Gordon & Co. in a deal valued at about $296 million. The private equity firm is paying $16.30 a share, a near 23% premium to Benihana’s closing share price of $13.30 on Monday.

The deal includes a go-shop that allows Benihana and its advisors to actively solicit and consider alternative proposals from third parties until July 1. Angelo, Gordon has the right to respond to any proposals. “There can be no assurances that this process will result in a superior proposal or alternative transaction,” Benihana said in the statement.

Miami-based Benihana, a restaurant chain known for its hibachi-style cooking, expects the deal to close in the second half of this year. In March, Benihana put itself up for sale for a second time, hiring Jefferies. The restaurant chain, which generates EBITDA in the low-to-mid-20 millions, was expected to find a PE buyer since same-stores sales have been solid for several quarters, peHUB has reported. Benihana, in April, said total restaurant sales increased year-over-year by 5.3% to $343.2 million. Benihana’s stock has also more than doubled since hitting a 52-week low of $6.76 over the summer.

The auction may not be over, says one PE exec. “Lots of people have looked at this over the years so it’s possible someone resurfaces,” the source says. Russell Glass, founder and head of New York investment firm RDG Capital, reportedly offered to buy Benihana for $7 a share in March 2010.

But another PE exec says Angelo, Gordon is paying “a full price” and thinks the “deal likely sticks.”

New York-based Angelo, Gordon has made other restaurant investments. In 2011, the firm acquired Firebird International, which operated 18 fired grill locations. Angelo, Gordon is reportedly investing out of a $650 million fourth buyout fund that is more than half invested.

Restaurants have been a very active sector for PE. Earlier this year, Centerbridge Partners agreed to buy P.F. Chang’s in a deal valued at $1.1 billion. In January Olympus Partners bought NPC International, the largest Pizza Hut franchisee. Tilman Fertitta, in February, completed his buy  of Morton’s Restaurant Group for $6.90 a share. Castle Harlan owned 27% of Morton’s.

Last year Golden Gate Capital acquired California Pizza Kitchen for $470 million and Roark Capital acquired Arby’s Restaurant Group for about $130 million. Benihana is also not the only restaurant firm up for sale. Palladium Equity Partners has put Taco Bueno on the block, according to sister news service Reuters. Houlihan’s Restaurants, which is backed by Goldner Hawn Johnson Morrison, is also up for sale.

John Tibe and Abid Rizvi of Jefferies advised Benihana on the sale.