The DOBR is an annual report that compares the market coverage of a PE firm – the percentage of relevant, completed PE transactions with a sell-side adviser that the firm reviewed – against all PE firms as well as their peer group.

Median PE market coverage of relevant deals was 17.1 percent for the 12 months ended June 2018, compared with 16.6 percent for the year-earlier period. A total of 138 PE firms qualified to be included in this year’s analysis, of which 109 were recurring from the prior year and 29 were first-time contributors.

Deal sourcing has become a staple component of the LP diligence process, and PE firms have responded with better data, technology, and most importantly, people.

Median coverage of relevant deals represented by boutique advisers, defined as firms selling only one or two companies to a PE firm in the past year, improved even more dramatically to 10.8% in 2018 from 9.6% in 2017.

Given how high purchase multiples are, GPs and LPs alike recognize that “outside the box” and proactive deal-sourcing strategies can result in off-the-beaten-track investment opportunities, often at lower purchase multiples.

This competitive edge in a heated market can be the difference between average and top-quartile fund performance. It’s important to note that according to the SPS Sell-Side Process Index for intermediaries, more than half of boutique advisers typically run limited processes.

There may be a misperception among larger funds that they are well covered from bankers, since there are fewer deals and intermediaries in this end of the market.

But even at the upper end of the market, funds can benefit from a more data-driven intermediary coverage approach, as well as having a dedicated business-development professional, triggering a substantial uptick in market share compared with their peers.

On the other end of the spectrum, coverage of Lower Market deals, defined as transactions in the $10 million to $50 million enterprise-value range, remains the most elusive for PE firms.

This is the most fragmented end of the market from an intermediary standpoint, with a deals-per-intermediary ratio of 2.08 as per the 2018 DOBR, compared with as high as 3.17 in the Upper Market category.

The lack of efficiency in the Lower Market is what makes it attractive for PE firms, and optimizing deal origination could be a great way to cash in on these inefficiencies.

What may be surprising is that the number of closed PE and M&A transactions in the 12-month period ended June 2018 was flat compared with the prior year.

PE firms may need to adjust their closing ratio expectations for the number of transaction opportunities it takes at the top of the funnel to close one deal. 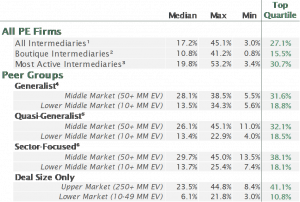 Nadim Malik is founder and CEO of Sutton Place Strategies, a provider of data and analytics for PE and M&A professionals to optimize their business-development efforts. Reach Nadim at NMalik@suttonplacestrategies.com or +1 646-418-2995.