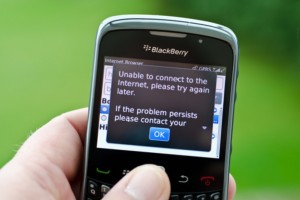 BlackBerry Ltd abandoned on Monday its plan to sell itself and said its CEO is stepping down, sparking a 16 percent dive in its share price and raising fears the struggling smartphone maker is running out of options.

After a two-month review of strategic options and talks with potential buyers that included Facebook, Lenovo and private equity firms such as Cerberus Capital Management LP, BlackBerry said it will abandon a sale. Instead, it will raise $1 billion by issuing convertible notes to a group of long-term investors including its largest shareholder, Fairfax Financial Holdings.

The only formal offer to buy BlackBerry – a tentative one – had come from Fairfax, which wanted to take the company private for $4.7 billion. But sources said Fairfax boss Prem Watsa had trouble financing the deal. Fairfax will now end up with $250 million of the debt offering.

“BlackBerry is hemorrhaging employees, it is hemorrhaging customers. The only thing that’s growing is doubt,” said John Stephenson, a senior vice president at First Asset Investment Management and one of BlackBerry’s disgruntled investors.

BlackBerry founders Mike Lazaridis and Douglas Fregin had partnered with Cerberus and mobile chip giant Qualcomm to consider a bid for BlackBerry. Only this weekend they had sent a letter to BlackBerry expressing their interest and asking for more time to finalize a bid, according to people familiar with the matter.

The consortium, which was backed by Goldman Sachs Group Inc, was confident it could secure the necessary financing but found BlackBerry uncooperative in providing key information, including information on its government contracts and intellectual property portfolio, the people said, asking not to be identified as the negotiations were private.

“BlackBerry is confident that it has run a robust strategic alternatives review process. The board believes that the deal outlined today was the best proposal, and in the best interest of its shareholders,” said a spokesman for BlackBerry.

However, sources familiar with BlackBerry’s board’s thinking on the matter said the board moved ahead on Watsa’s financing proposal because Cerberus and its partners did not have a solid proposal with the required financing in place.

The sources stressed that all the strategic and financial players that delved into the company’s books were aware of the bid deadline, and that the board opted for the best deal put before it within the timetable laid out.

BlackBerry shares closed 16 percent lower at $6.50, giving the company a market value of about $3.38 billion, down from its peak of $80 billion.

BlackBerry named John Chen, credited with turning around Sybase Inc in the late 1990s, as its interim CEO and executive chairman. Sybase, an enterprise software company, was eventually acquired by SAP AG in 2010.

Chen’s appointment was a surprise to investors as was the departure of current CEO Thorsten Heins, who will leave in about two weeks after the debt offering is completed. The company gave no reasons for the change.

BlackBerry, based in Waterloo, Ontario, pioneered on-the-go email, and for years its pagers and phones were must-have devices for political and business leaders. But it has bled market share to Apple Inc’s iPhone and devices that powered by Google Inc’s Android software.

In an interview with Reuters, Chen stressed his experience as a turnaround artist, and said he has no interest in shutting BlackBerry’s loss-making handset business.

“I’m doing this for the long term. I’m going to rebuild this company,” said Chen, who said it would take six quarters to turn BlackBerry around. “I know we have enough ingredients to build a long-term sustainable business. I’ve done this before and seen the same movie before.”

Chen, who joined private equity group Silver Lake as senior adviser a year ago, said his involvement with BlackBerry has nothing to do with his ties to Silver Lake, which partnered with Michael Dell recently to take computer-maker Dell Inc private.

“Fairfax’s investment will buy the company some time, which it badly needs, but the company needs a new strategy more than ever,” said Jan Dawson, Ovum’s chief telecoms analyst, noting that communication on the strategy must start “very soon”.

BlackBerry said Watsa, who stepped down pending BlackBerry’s strategic review, is rejoining its board as lead director and chair of its compensation, nomination and governance committee. Chen replaces Barbara Stymiest, as chair of BlackBerry’s board, while Heins and David Kerr are also stepping down.

Heins has been BlackBerry CEO for less than two years. In April 2013, the board agreed to a new pay deal that included generous payments if Heins lost his job due to a change in control, or if he was terminated without cause, including two years’ salary and a variety of other incentive payments.

FAIRFAX STILL ON BOARD

In BlackBerry’s new debt deal, the seven-year subordinated debentures will be convertible into common shares at $10 each. The private placement could eventually increase the number of BlackBerry shares by almost 20 percent.

BlackBerry did not name the other investors in the deal, but Watsa said Silver Lake is not one of them.

Since BlackBerry thus far carries no debt, analysts noted that the financing deal puts Fairfax in a strong position even if the turnaround plan fails and BlackBerry is forced to seek creditor protection. Debt holders take precedence over equity investors in such cases, giving Fairfax a bigger say in the company’s ultimate fate.

“We did the due diligence … and our conclusion was that a leveraged buyout with high-yield debt and at high interest rates was not appropriate for this company,” Watsa told Reuters in an interview on Monday. “So we came out with the convertible debenture deal that we saw as more appropriate.”

The investors have an option to buy up to an additional $250 million worth of debentures within 30 days after closing.

Despite the new financing deal challenges remain, including a declining subscriber base, falling shipments, the defection of clients that use its enterprise servers and a loss of market share, analysts say.