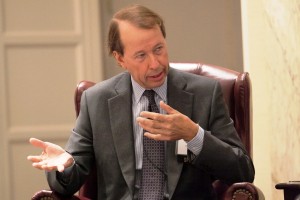 (Reuters) – Blackstone Group LP said on Friday it would spin off its M&A, restructuring and private equity fundraising advisory businesses and combine them with the M&A advisory firm of Morgan Stanley veteran Paul Taubman, in a move to avoid conflicts.

Blackstone, whose primary business includes buying and selling companies and real estate assets, as well as lending to them and buying their debt, faced restrictions on the use of its advisory arm.

“As the largest alternative asset manager in the world, and with our investing areas considerably broader and larger than even a few years ago, we have not been free to aggressively grow our advisory businesses further out of concern for potential conflicts,” Blackstone Chief Executive Stephen Schwarzman said in a statement.

Following a tax-free spin-off that is expected in 2015, Blackstone’s current shareholders will own 65 percent of the new publicly listed company. Taubman, his firm’s partners and Blackstone’s advisory employees will own the rest.

Blackstone’s advisory businesses being spun out account for a tiny fraction of the New York firm’s earnings, generating about $185 million of revenue for the six months to the end of June. Blackstone had total revenue of $3.7 billion in the same period.

“Given the partnership with Taubman, I would expect Blackstone unit-holders to participate from an economic standpoint, assuming that platform continues to grow,” said Sandler O’Neill + Partners LP analyst Michael Kim.

Blackstone shares were trading up 1.1 percent at $30.11 in morning trading in New York on Friday.

The new company, to be led by Taubman, will advise companies on mergers and acquisitions, as well as debt restructurings. It will also help private equity and other alternative investment funds with their fundraising efforts.

Taubman, who left Morgan Stanley in 2012, has been behind some of the biggest deals of the past few years, advising Verizon Communications Inc on its $130 billion takeover of its wireless joint venture with the UK’s Vodafone Group Plc, and Comcast Corp on its agreed $42 billion takeover of Time Warner Cable Inc.

Note: This story has been updated from an earlier version.