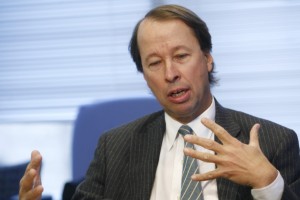 Tony James, Blackstone’s president, doesn’t think lifting the ban on advertising will have much impact.

James, on a conference call with reporters to discuss Blackstone’s second quarter results, was asked about the SEC’s decision last week to allow general solicitation by private equity, venture capital and hedge funds.”As you know, all the rules are not yet written,” he said. “I don’t think it makes much of a difference for Blackstone.”

The New York alternative asset manager gears its funds toward “bigger investors,” James said. “Even smaller institutions we don’t focus on…We have a limited amount of bandwidth and our system is not set up to serve thousands of masters…I don’t think the impact will be too huge. It will not be like night and day.”

Fortune’s Dan Primack asked James if Blackstone might one day advertise in The Wall Street Journal. “No,” James said.

On Thursday, Blackstone reported that second quarter economic net income more than tripled to $703 million, compared to $212 million a year ago. ENI was 62 cents per share versus the average analyst projection of 49 cents, according to a Thomson Reuters poll. Assets under management totaled $230 billion at the end of June, up 21 percent year on year. Fee-earning assets under management rose 12 percent to $176 billion, Reuters reported.

James also said not to expect many dividend recaps from Blackstone. Dividend recaps are a way for PE firms to exit their holdings, he said. When the IPO market is hot, there will be fewer dividend recaps. Likewise, if a PE firm expects to sell an asset via strategic sale, then “you hold off on recaps,” he said. “We had a pretty robust equity market and a recovering corporate acquisitions market. Don’t expect a lot of recaps in the near term for us.”