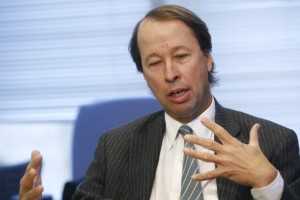 Tony James, the Blackstone Group’s president, called 2012 the best year for the global buyout shop since it went public in 2007.

James comments came as he discussed Blackstone’s full year and fourth quarter 2012 results. New York-based Blackstone said economic net income (ENI), a metric of profitability that takes into account the current market valuation of its portfolio, was $670 million, up 43 percent from a year ago, Reuters said. Private equity posted an 86 percent rise in ENI to $198 million, hedge funds a 163 percent rise to $82.7 million and credit a 96 percent rise to $107.2 million.

“2012 is the best year we’ve had since going public…every business is showing strong AUM growth,” James said on the call.

The deal environment is slow, James pointed out on the earnings call. He attributed this pause to several factors. Many companies that are sitting on “aggressive expansion plans” were waiting for clarity from lawmakers on taxes and “all kinds of regulatory policies,” he said. Sellers are also waiting for better economic times to put their assets on the market, James said. “So the deal market has been slow,” he said.

James, however, doesn’t think Silver Lake’s possible takeover of Dell means a return to larger deals. The credit markets have been strong enough to support a $10 billion size deal or more for some time, James said. “There is already a general perception that you could do large deals at quite attractive rates.”

James pointed out that the Dell buyout won’t require a big equity check from PE. Michael Dell is expected to contribute almost half of the estimated $8 billion to $9 billion equity needed for Silver Lake’s takeover of the PC maker, Bloomberg News said. “So not the hugest amount of equity is coming out of the private equity world,” James said. “[The Dell buyout] has focused the world a bit more on mature tech companies and the values there,” he said.