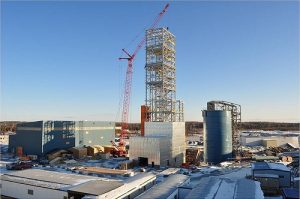 Precious metals producer North American Palladium Ltd (NAP) (TSX: PDL) has closed its previously-announced recapitalization deal with Brookfield Asset Management‘s private equity group. As a result, amounts owing to Brookfield have been converted into equity. Brookfield now owns 92 percent of NAP’s outstanding common shares and has appointed Managing Partners Peter Gordon and David Nowak to the board of directors. The Toronto-based NAP has yet to complete a $50 million rights offering backstopped by Brookfield and other parties. The offering’s net proceeds will be used to repay a bridge loan facility with Brookfield and fund operations at its Lac des Iles palladium mine in Ontario.

TORONTO, ONTARIO–(Marketwired – Aug. 6, 2015) – North American Palladium Ltd. (“NAP” or the “Company”) (TSX:PDL)(OTC PINK:PALDF) announced today that it has completed the previously announced plan of arrangement pursuant to Section 192 the Canada Business Corporations Act (the “Arrangement”), which Arrangement is more particularly described in the management proxy circular dated June 30, 2015 (the “Circular”).

“The recapitalization is a major step toward normalizing NAP’s capital structure and enhancing liquidity,” said Phil du Toit, President and CEO. “We believe we are now well-positioned to pursue the longer-term potential at our Lac des Iles mine.”

As previously announced, the Arrangement received support at the Meeting of Debentureholders and the Annual & Special Meeting of Shareholders, both held on July 30, 2015. The Arrangement also received final approval from the Ontario Superior Court of Justice on August 5, 2015.

As previously disclosed and in accordance with the recapitalization agreement entered into between the Company and Brookfield, the Board of Directors has been reconstituted. The Company’s Board of Directors is now comprised of J. Peter Gordon, David Nowak, John W. Jentz, Dean Chambers, and Greg Fauquier.

Every 5.91 rights will entitle the holder thereof to purchase one (1) common share at an exercise price of $5.97 per common share (the “Basic Subscription Privilege”) prior to 5:00 p.m. (Toronto time) on September 10, 2015 (the “Rights Expiry Date”). A holder of Rights who has exercised in full their Basic Subscription Privilege may subscribe pro rata for additional common shares, if available, at the same exercise price (the “Additional Subscription Privilege”). These additional whole common shares will be allocated from those common shares, if any, available as a result of Rights that are unexercised at 5:00 p.m. (Toronto time) on the Rights Expiry Date. The Rights will be exercisable prior to 5:00 p.m. (Toronto time) on the Rights Expiry Date. If not exercised prior to such time, the Rights will have no value. The Rights Offering is expected to close on or about September 14, 2015 (the “Closing Date”).

Mailing of the rights certificates representing the Rights to shareholders is expected to commence on or about three (3) business days after the Record Date. To subscribe for common shares, a completed rights certificate, together with payment in full of the exercise price for each common share subscribed for, must be received by the rights agent for the Rights Offering, Computershare Trust Company of Canada (the “Rights Agent”), prior to the Rights Expiry Time. The Rights and the common shares issuable upon exercise of the Rights will be listed on the Toronto Stock Exchange (“TSX”). The Rights are expected to be listed for trading on the TSX beginning on August 18, 2015 under the symbol “PDL.RT”.

As previously announced, the Company has entered into a backstop agreement (the “Backstop Agreement”) with Brookfield pursuant to which Brookfield has, subject to certain terms and conditions, agreed to purchase all of the common shares which remain unsubscribed for by the holders of the Rights at the expiry of the Rights Offering under the Basic Subscription Privilege and the Additional Subscription Privilege (the “Backstop Commitment”). Polar Securities Inc. (“Polar”) has agreed to support the Backstop Commitment by purchasing 10% of such unsubscribed common shares. In consideration for the Backstop Commitment, on the Closing Date, the Company will issue 226,131 common shares to Brookfield and 25,126 common shares to Polar with an estimated aggregate value of $1.5 million.

Further details concerning the Rights Offering and the procedures to be followed by holders are contained in the Circular. A copy of the Circular is available under the Company’s profile at www.sedar.com. A registration statement relating to the Rights Offering has been filed with the U.S. Securities and Exchange Commission and is accessible under the Company’s profile at www.sec.gov.

NAP is an established precious metals producer that has been operating its Lac des Iles mine (LDI) located in Ontario, Canada since 1993. LDI is one of only two primary producers of palladium in the world, offering investors exposure to palladium. The Company’s shares trade on the TSX under the symbol PDL and on the OTC Pink under the symbol PALDF.

Forward-looking statements are also based upon a number of factors and assumptions that, while considered reasonable by management, are inherently subject to significant business, economic and competitive uncertainties and contingencies. The factors and assumptions contained in this news release include, but are not limited to: that the Company will be able to realize its assets and discharge its liabilities in the normal course of business, that metal prices and exchange rates between the Canadian and United States dollar will be consistent with the Company’s expectations, that there will be no significant disruptions affecting operations, and that prices for key mining and construction supplies, including labour, will remain consistent with the Company’s expectations. The forward-looking statements are not guarantees of future performance. The Company disclaims any obligation to update or revise any forward-looking statements, whether as a result of new information, events or otherwise, except as expressly required by law. Readers are cautioned not to put undue reliance on these forward-looking statements.