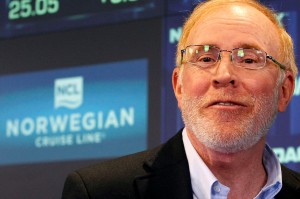 Earlier this month Buyouts contributor Katie Roof caught up with Kevin Sheehan, CEO of Norwegian Cruise Line, just after it priced its IPO on January 17. The company is backed by Apollo Management Group and TPG Capital. Check out the video here.

1. You priced at $19 a share, which was higher than you were hoping for. You raised over $400 million in this offering, so a big offering. Why did you decide to do it right now?

I think the market just happened to have a sweet spot in it. It’s been a five-year journey to reach this point. We thought it was the right time to establish a trading value for our company and things worked out perfect so we’re very excited about it.

2. You’re private-equity backed. You have Apollo and TPG behind you. They’re still going to be your investors. How have they helped you get here and why are they still staying involved?

The business has done very well. I feel very good about where we are right now. They’ve been phenomenal partners, along with Genting Hong Kong that owns 50 percent of the company. What we’ve been able to do with the private equity ownership is access their other portfolio companies…So we take advantage of a lot of those ownership things and they’ve been very supportive and allowed us to build the businesses smartly. And they are very excited about where we are. And as you said, they’re not selling shares.

3. And Apollo actually has stakes in other hospitality companies. Do you think their expertise in that area lended any assistance to you?

Of course, yes. So they have some other assets, even in the cruise industry. So we’re able to leverage that knowledge base. And we’re able to leverage those investments. Yeah, so a perfect situation for our company to be able to open the door to a lot of different things and we’ve taken full advantage of every one of them…And wherever there’s an opportunity we’ve taken advantage of that whether it’s on the entertainment side or even as simple as buying certain things that they have a bigger business in. We’ve been able to kind of leverage off their discounts as an example.

4. What do you plan to use the capital for?

We’re using it to pay down some debt, strengthening our balance sheet. We’ve gone a long way since I came to the company in 2008 from a leverage standpoint and we’re on a journey to do significant things in the future and this is another step along the way.

We have a team that’s come from outside the industry. I think we’re showing our ability to navigate whatever’s been thrown at this industry in the last number of years. And as you can imagine between the economic thing and oil prices, tsunamis and hurricanes, everything has been a challenge to the industry. I think the industry in general has done well. It’s a strong industry. It’s been able to persevere over the long-term and we within that smaller niche have been able to do a little bit better. So we’re excited.