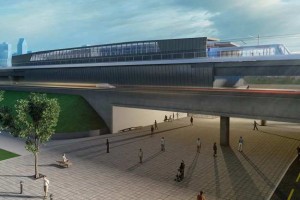 CDPQ Infra, the infrastructure investment arm of the Caisse de dépôt et placement du Québec, has announced plans for its Réseau électrique métropolitain (REM), an electrified rail network that will link locations in the Greater Montréal area. The new network represents an investment of about $5.5 billion. The Caisse said it will commit $3 billion to the project. The proposed financial structure also requires investments by the Québec and Canadian governments. Once completed, the REM will be one of the largest automated transportation systems in the world, the Caisse said.

Montréal, April 22, 2016 – CDPQ Infra, a subsidiary of Caisse de dépôt et placement du Québec, unveiled plans today for its Réseau électrique métropolitain (REM), an integrated, world-class public transportation project. Launched 288 days after the creation of CDPQ Infra, the proposal marks the beginning of a series of consultations to be held over the next few months with stakeholder groups and interested citizens.

As proposed, the REM will link downtown Montréal, the South Shore, the West Island (Sainte-Anne-de-Bellevue), the North Shore (Deux-Montagnes) and the airport in a unified, fully automated, 67-km light rail transit (LRT) system comprising 24 stations and operating 20 hours a day, 7 days a week.

Once completed, the REM will be the third largest automated transportation system in the world after Dubai (80 km) and Vancouver (68 km), and just ahead of Singapore (65 km). For the metropolitan area, the REM also represents the largest public transportation infrastructure since the Montréal metro, inaugurated in 1966. Combined with existing transportation networks (metro, trains and buses), the REM opens a new era of public transit development in the Greater Montréal area.

The solution proposed by CDPQ Infra will:

As a single, integrated transportation network, the REM will offer a number of efficient travel options in the Greater Montréal area. Connections between the new network and existing bus, metro and train systems have also been designed to simplify itineraries.

With frequent and reliable service running from 5:00 am to 1:00 am – 20 hours a day, every day – the REM represents a new paradigm and significant time savings for commuters in the metropolitan region. The decision to use dedicated tracks will allow for quick and uninterrupted travel, and passengers will have Wi-Fi connectivity and access to live status updates.

New stations will be integrated into their urban environment and designed to allow easy access for pedestrians, bicycles, cars and buses. All stations will be covered, climate-controlled, equipped with elevators, and will meet the principles of universal access.

Finally, by choosing the Highway 40 route to the West Island, the project allows for the creation of a dedicated corridor for public transportation, without the need to share tracks with freight trains.

The project aims to reinforce the dynamism of the Montréal economy. It demonstrates the potential of CDPQ Infra’s public-public partnership model. While improving people’s daily lives, the REM will generate stable returns for la Caisse and its clients.

“Today we are proposing an innovative public transit solution that will improve the quality of life in Montréal and deliver important economic, social and environmental benefits. It will improve the metropolitan region’s overall competitiveness,” said Michael Sabia, President and Chief Executive Officer of la Caisse. “The new transit system will also deliver long-term, stable investment returns very well aligned with the needs of our depositors, the people of Québec.”

“As such, this project is perfectly in line with our overall strategy and with our approach to investing in Québec – focused as it is on the development of high-impact, commercially sound projects. Every time passengers use their new transit system, they will be helping to secure their future retirement. This virtuous circle serves as a good illustration of the principle underlying the public-public partnership model,” added Mr. Sabia.

“Nine months after the launch of CDPQ Infra, we are taking another important step,” said Macky Tall, President and Chief Executive Officer, CDPQ Infra. “Much work remains to be done, but today we are unveiling a state-of-the-art solution. With highly frequent service, 20 hours a day, universal access and Wi-Fi available throughout the network, the REM promises to improve the daily commute of hundreds of thousands of people. We are committed to delivering the project on-time and on-budget.”

The new network represents an investment of approximately $5.5 billion. La Caisse is willing to commit $3 billion to the project. The proposed financial structure also requires investments by the governments of Québec and Canada.

“A network as significant as the one we are proposing could potentially add more than $3 billion to the Québec GDP over four years. We also expect close to $5 billion in private real estate developments along the chosen route,” said Christian Dubé, Executive Vice-President, Québec at la Caisse. “Such economic benefits clearly show that la Caisse’s return objectives go hand-in-hand with Québec’s economic development.”

The new network will generate approximately 7,500 direct and indirect jobs annually during the 4-year construction phase, and more than 1,000 permanent jobs once in operation.

The plan also includes reserve capacity to meet future needs, with five potential stations envisioned for areas such as McGill University and Université de Montréal. The proposed route will also go through areas with high economic development potential, including the airport, Technoparc St-Laurent, Université de Montréal, the Peel Basin and the Wellington-Bridge area.

The new network will be efficient, accessible and well-connected to existing transit systems, encouraging the use of electric public transportation in five key areas of the metropolitan region.

The REM could thus help reduce GHG emissions by 16,800 tonnes annually and accelerate Québec’s transition to a low-carbon economy. At the same time, this new public transit system could reduce economic losses associated with traffic congestion, currently estimated at $1.4 billion annually in the Greater Montréal area.

Next steps and conditions for success

The decision to move forward with the construction of this major public transportation project is conditional upon the financial participation of the governments of Québec and Canada, which forms an integral part of the proposed financial structure.

CDPQ Infra will begin a consultation process with various stakeholders in the coming weeks. Information and discussion sessions will also be organized for the general public in all areas affected by this extensive new network. CDPQ Infra is committed to providing open, regular and timely communications through each phase of the project.

CDPQ Infra plans to submit this project to the environmental impact public hearing (BAPE) process at the end of the summer of 2016.

CDPQ Infra is committed to rigorously managing the procurement process by issuing open and transparent international calls for tenders. This process will be based on global best practices for efficiency and transparency.

If all these steps are taken successfully, construction is currently expected to begin in the spring of 2017, so that the first trains can be in service towards the end of 2020.

For more information, citizens are encouraged to consult the new Project section in the CDPQ Infra website: cdpqinfra.com.