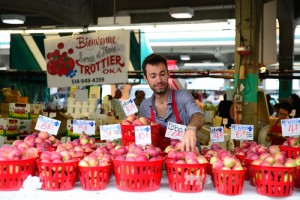 The Caisse de dépôt et placement du Québec and Desjardins Capital de risque have jointly committed C$230 million to phase II of the Capital Croissance PME (CCPME) fund. Like the first partnership, which was capitalized at C$200 million in 2010, CCPME II will invest primarily in the form of subordinated loans of under C$5 million in support of the growth and development of Québec small businesses. CCPME I has invested C$135 million in 128 businesses to date.

The Capital Croissance PME fund embarks on Phase II, having already invested $135 million in under three years in 128 businesses across Québec’s regions

MONTREAL, April 5, 2013 /CNW Telbec/ – Desjardins Group (www.desjardins.com) and the Caisse de dépôt et placement du Québec (the “Caisse”) announced Phase II of the Capital Croissance PME (CCPME) fund, which will see an additional $230 million invested over three years to support the development and growth of Québec small businesses. This amount is in addition to the $200 million granted between July 2010 and June 2013, Phase I of the fund.

Managed by Desjardins Venture Capital, CCPME is capitalized in equal shares by the Caisse and Capital régional et coopératif Desjardins (CRCD). The fund aims to support small businesses in carrying out expansion, R&D, business acquisition and productivity optimization projects. It also gets involved to keep SME ownership in Québec once entrepreneurs reach retirement age. Investments are primarily in the form of subordinated loans of under $5 million.

“Québec-based small businesses and investors will reap the benefits of extending the partnership between the Caisse de dépôt et placement du Québec and CRCD,” stated Monique F. Leroux, President, Chair of the Board and CEO of Desjardins Group. “The Phase I’s track record is already impressive. With 35% of funds invested in the resource regions and cooperatives, the fund contributes each year to creating wealth by targeting companies that make a difference in their communities and drive the ability of our businesses to reach out to international markets.”

“This fund has made a tangible contribution to the growth of around 100 successful Québec companies. The Caisse is committed to renewing this partnership, which offers direct support to small-cap companies throughout Québec, our market of proximity,” said Michael Sabia, President and Chief Executive Officer of the Caisse de dépôt et placement du Québec. “Our involvement in the Capital Croissance PME fund definitely supports our objective of building future champions.”

The Caisse de dépôt et placement du Québec is a financial institution that manages funds primarily for public and private pension and insurance plans. As at December 31, 2012, it held $176.2 billion in net assets. As one of Canada’s leading institutional fund managers, the Caisse invests in major financial markets, private equity, infrastructure and real estate globally. For more information: www.lacaisse.com.

With over 103,000 shareholders, Capital régional et coopératif Desjardins is a publicly traded company managed by Desjardins Venture Capital. With net assets of $1,356 million, the Company contributes to economic development by valuing and nurturing the best of Québec entrepreneurship. Directly or indirectly through partner funds, Capital régional et coopératif Desjardins supports the growth of over 330 companies, cooperatives and funds in various industries spanning all Québec regions. (capitalregional.com)

Desjardins Group is the leading cooperative financial group in Canada with assets of nearly $200 billion. Drawing on the strength of its caisse network in Québec and Ontario and its subsidiaries across Canada, it offers a full range of financial products and services to its members and clients. Desjardins specializes in Wealth Management and Life and Health Insurance, in Property and Casualty Insurance, in Personal Services, in Business and Institutional Services. Best Corporate Citizen in Canada for 2012 and among Canada’s Top 100 Employers, Desjardins is supported by the skills of its 44,942 employees and the commitment of 5,268 elected officers. Desjardins members and the general public are invited to visit Desjardins Group’s education and cooperation program website at www.desjardins.com/co-opme.