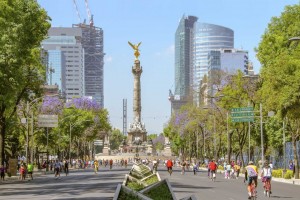 The Caisse de dépôt et placement du Québec (CDPQ) has appointed Alonso García-Tamés as managing director of its subsidiary in Mexico, CDPQ México, and head of Latin America. Operating from Mexico City, García-Tamés will play a key role in developing and managing the Caisse’s investments in Mexico, as well as in the Latin American region. As part of these duties, he will help develop the co-investment platform for Mexico infrastructure projects launched last September by the Caisse in partnership with Mexican institutional investors. Prior to joining CDPQ México, García-Tamés was a senior executive at Citi and Banamex.

Based in Mexico City, Mr. García-Tamés will play a key role in developing and managing CDPQ’s investments in Mexico, a market identified as a top priority in CDPQ’s globalization strategy, as well as in the Latin American region.

He will also establish and maintain close relationships with key public and private institutions to reinforce CDPQ’s positioning as a long-term partner and investor in the Latin America region.

In September 2015, CDPQ announced the creation of a co-investment platform for infrastructure projects with leading Mexican institutional investors (including the three largest Mexican Afores, Pensionisste and Fonadin). Mr. García-Tamés will be involved in the development of this partnership and will work closely with CDPQ’s investment teams more broadly to identify the best investment opportunities in Mexico.

“Mr. García-Tamés has both an in-depth knowledge and considerable experience in the Mexican infrastructure market. With his extensive networks in Mexico, he will be a key asset for CDPQ as we continue to build our investments and partnerships in one of our top priority markets,” said Rashad Kaldany, Executive Vice-President, Growth Markets.

“I am very pleased to join CDPQ’s team and look forward to contribute to CDPQ’s investments and activities in Mexico and Latin America, which offer very attractive long-term investment opportunities”, Mr. García-Tamés said.

Before joining CDPQ México, since 2011, Mr. García-Tamés was Corporate Managing Director, Public Sector and Capital Markets – Latin America at Citi and Banamex. Previously, Mr. García-Tamés worked as Chief Executive Officer of Banobras and Deputy Minister of Finance and Public Credit in the Mexican Ministry of Finance. He also held several positions at the Central Bank of Mexico over almost 20 years, including as General Director of Operations.

Mr. García-Tamés is taking up his new position today, March 29.