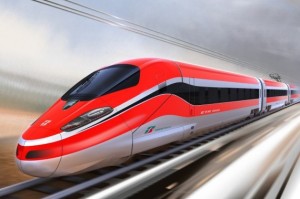 Bombardier Inc (BBDb.TO) said on Thursday that Québec’s public pension fund manager is buying a 30 percent stake in its rail arm for US$1.5 billion, putting the company on stronger financial footing as it pushes to launch its long-delayed CSeries jet.

The cash infusion from the fund manager, the Caisse de dépôt et placement du Québec, is the second financing deal the embattled Montréal-based Bombardier has made in recent weeks, sending its Frankfurt-listed shares up 12 percent. (BBDb.F)

Last month, the government in Bombardier’s home province of Québec agreed to invest US$1 billion in the CSeries program for a nearly 50 percent stake in the project, which has left the manufacturer saddled with over US$9 billion in debt.

The latest deal puts an end in the near term to Bombardier’s alternative plan to list a part of the rail business in Europe.

Reuters reported in October the rail IPO was put on the back burner in favor of a deal with a single entity, and that the company was in talks with the Caisse.

The rail unit will be governed by a new board of seven members, with three to be named by the Caisse.

For the Caisse, which manages Québec’s public pension plans, the deal will give it a closer look into the rail industry as it invests in some big infrastructure projects in Québec.

In July, the Caisse set up a subsidiary, CDPQ Infra, which is expected to take the lead on financing, building, owning and operating everything from light rapid-transit systems to commuter trains in Québec.

“Bombardier Transportation is a global leader in the rail industry, with a robust backlog, predictable revenues, and meaningful potential for growth,” said the Caisse’s Chief Executive Officer Michael Sabia. “This investment is structured with the goal of delivering double-digit returns.”

If the rail unit outperforms its business plan, the Caisse’s stake would fall by 2.5 percent annually to a minimum threshold of 25 percent.

If the unit under-performs, the Caisse’s interest will rise by 2.5 percent annually, up to a maximum of 42.5 percent over a five-year period.

The initial variant of Bombardier’s narrow-body CSeries is set to start service next year, but the entire program is running years behind schedule and billions of dollars over budget.

By Allison Lampert and Euan Rocha

(With additional reporting by Amrutha Gayathri and Sneha Banerjee in Bengaluru; Editing by Kirti Pandey, Anil D’silva and Jeffrey Benkoe)