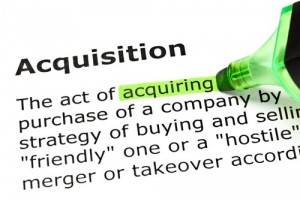 A new report by CB Insights says Canada was second only to the United Kingdom in the number of non-U.S. acquisitions of private technology companies in 2012. The report, which counted 2,277 acquisitions last year, noted Canada “has a lot of momentum as of late on both the financing and exit front”. Thomson Reuters (publisher of peHUB Canada) has reported steady venture-backed exits in Canada in 2012, including one of the largest buys in market history, the US$1.1 billion purchase of Montréal’s Enobia Pharma Corp. by Alexion Pharmaceuticals Inc.

2012 saw 2277 private technology companies acquired globally. Acquirers paid $46.8B for targets (in deals with disclosed valuations) with 30% of deals accounting for 80% of the value.

In a big surprise, 76% of tech companies acquired in 2012 had not raised institutional investment (VC/PE) prior to acquisition. While there were no bootstrapped or strictly angel-funded billion dollar exits (of which there are few in any case), it is clear that there are a lot of tech companies being formed and sold who are able to sustain themselves on their profits, angel (friends & family) financing, etc.

The two tech juggernauts did 12 private tech company acquisitions in 2012. Five of Facebook’s acquisitions were talent acquisitions . Google and Cisco were most frequent disclosers of private company valuations . Avnet was the surprise in the top 10 most active acquirers with a string of small, mostly tuck-in acquisitions.

While there is much fanfare when the billion dollar exits happen, they represent 2.5% of all private tech company acquisitions in 2012 (translation: they don’t happen often). More than 50% of deals are less than $50M and more than 80% of the acquisitions are less than $200M.

94% of acquisitions were made by strategic buyers. Financial sponsors comprise a small 6% of deal volume.

The West Side is the Best Side

Massachusetts Not a Top 3 Destination for Acquirers

Mass remains a top market for tech VC despite losing some of its mojo to NY which has usurped the #2 spot. On the M&A front, Mass was somewhat surprisingly not in the top 3 for private tech company acquisitions in 2012 as it got edged out narrowly by Texas for the #3 spot.

The UK led international markets with the most private tech company acquisitions in 2012 followed by Canada which has a lot of momentum as of late on both the financing and exit front. Rounding out the top 3 markets globally was India suggesting that the entrepreneurial tech community is becoming more established.