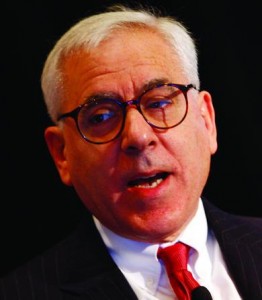 Carlyle Group said it continues to see strong interest in its many funds in the market from insitutional investors and high net-worth individuals, as it plans to launch a new infrastructure pool next year.

Carlyle Co-CEO David Rubenstein said the firm plans to begin raising an infrastructure fund to meet demand from LPs with allocations to that asset class.

Carlyle said it continues to draw interest from sovereign wealth funds, with about two thirds of that investor base coming from Asia and one third from the Middle East. With the price of oil as low as it is, Middle East LPs remain keen to boost returns by investing in private equity, Rubenstein said.

Carlyle also hopes to draw commitments form high net-worth individuals through various feeder funds. Rubenstein said a number of products aimed at that audience will launch next year, but he declined to provide more details.

Among the funds it has in the market, Carlyle is raising its fourth distressed investing fund, Carlyle Strategic Partners IV, boosted by a track record of top-quartile performance from its three predecessors.

Caryle is also drawing in capital for its Core Plus Real Estate fund, with no disclosed target for that pool. It expects to hold a first close on the fund early next year.

Meanwhile, its Carlyle Energy Mezzanine Opportunities Fund II has drawn in more than $2.4 billion and may go higher, the firm said.

In the most recent quarter, the firm also closed Carlyle Realty Partners VII fund at  $4.2 billion, reaching its hard cap.

Analysts asked about Carlyle Global Partners, which will hold investments for five to 10 years or longer. Carlyle said it’s focusing the fund on a limited number of investors, with “good progress” on the effort. It may disclose more details on the fund as early as the fourth quarter, Carlyle said.

All told, Carlyle raised $4.6 billion during the third quarter across its fund families. It invested $1.6 billion and realized $3.7 billion in proceeds.

Carlyle’s economic net loss resulted mostly from a 4 percent carry fund portfolio depreciation in the third quarter, in the face of weaker equities prices and lower marks on its portfolio.