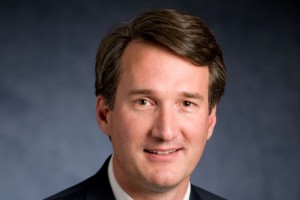 I’ve often wondered why the Carlyle Group’s David Rubenstein gives so many speeches and now I know: He loves it.

That’s according to Glenn Youngkin, Carlyle’s chief operating office. Youngkin, who recently spoke to David Snow, Privcap’s co-founder and CEO, says he’s not sure anyone can give as many speeches as Rubenstein.

Rubenstein, who is Carlyle’s co-CEO and co-founder, is extraordinarily talented and has really distinguished himself as a speaker that people “really, really want,” Youngkin says.

“David really loves to do it,” he says.

Many in the press, including myself, have wondered about succession plans at the big buyout shops. Blackstone is grooming six executives to take over for Stephen Schwarzman, the Blackstone Group’s CEO, Reuters has reported. There are contenders at KKR to take over for Henry Kravis and George Roberts, the New York Times has reported. Carlyle’s plans are not clear. Youngkin is clearly among the next generation of leaders at Carlyle, PrivCap’s Snow tells peHUB.

“There are a number of very talented senior people below the founder level helping to run the firm and no formal succession plan has been announced,” a Carlyle source says.

Youngkin, in fact, tells Snow that he doesn’t think Carlyle “will ever have a single CEO.” The firm, which has more than $157 billion AUM, 32 offices around the world and 210 portfolio companies, is “too big” and there are too many responsibilities, Youngkin says. “It doesn’t fit the way we work,” he says. “We don’t work in a command and control environment.”

Now COO, Youngkin was 28 years old when he joined Carlyle in 1995. He speaks about how it is to work with Rubenstein, D’Aniello and Conway. “I’ve never seen them argue. I’ve seen them disagree.”

Carlyle also saw the decline in the financial markets coming in 2007, Youngkin says. The global buyout shop took some steps to shore up the firm, including having the partners inject capital, and its portfolio companies. Youngkin also talks about how he got his title as COO and what exactly he does. See the video here.