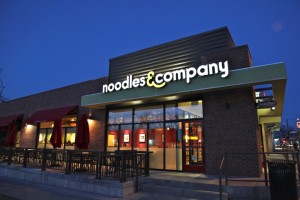 Noodles & Co., the casual dining chain backed by Catterton Partners, will be the year’s first restaurant IPO when it goes public next week.

Broomfield, Colo.-based Noodles is offering 5.35 million shares at $13 to $15 each via underwriters including Morgan Stanley and UBS. The company expects to price its deal on Thursday, June 28 and go public the next day, an underwriting source says.

Noodles, which sells sandwiches, salads as well as noodles & pasta, is the first restaurant company to go public in 2013, according to Dealogic. John Fitzgibbon, founder of IPOScoop.com, says the Noodles offering will get done, but the deal is more notable for how quickly the company ran through the IPO process. Noodles filed a confidential draft registration statement with the SEC in March that was made public  May 23. Typically, companies can wait in registration for months after filing their S-1s before going public.

“The JOBS Act and the stock market have opened the door for PE [deals]. They can do a confidential filing and the pieces fall quickly into place. It’s a good deal for everyone,” Fitzgibbon says.

Bloomin’ Brands, which owns Outback Steakhouse, was the last restaurant IPO to hit the market. Bloomin’ Brands, a portfolio company of Bain Capital and Catterton, priced its offering at $11 a share in August. The company’s stock is traded at $25.17 Tuesday. Chuy’s Holdings, which went public in July at $13, changed hands at $39.64. Chuy’s is backed by Goode Partners.

The Noodles IPO comes more than two years after Catterton acquired a stake in the company. In December 2010, Catterton invested $91 million for a 45.19% stake in Noodles, while Argentia Private Investments put in $90 million for a 44.69% holding, according to SEC filings. Argentia is a unit of Public Sector Pension Investment Board, one of Canada’s largest pension investment managers.

Neither Catterton nor Argentia is selling shares in the IPO. Noodles also doesn’t appear to have paid out any dividends since being acquired by Catterton/Argentia. Catterton currently owns 10.5 million shares of Noodles. Based solely on paper gains, the PE firm’s stake could be worth $147 million. Argentia, which has 10.38 million shares, could see its holding valued at $145 million.

The IPO also comes as Catterton is fundraising for its seventh pool. The consumer focused PE firm began marketing last year for Fund VII, which has a $1.2 billion target, peHUB has reported. The pool has reached its $1.2 billion target and is on track to hit its $1.5 billion hard-cap, a different source says.