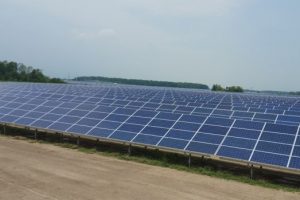 “We are delighted to complete this landmark financing,” said Matt O’Brien, President of Connor, Clark & Lunn Infrastructure. “The financing attracted significant support from a broad base of Canadian and US investors, making it a testament to the quality of the GRS project and the strength of our equity partners, Samsung and Six Nations, and our construction partner, CarbonFree Technology Inc. The replacement of our existing bank debt with this long-term bond further de-risks this important investment for us, a core holding in our growing infrastructure portfolio.”

The GRS project began commercial operation in March 2015 after a 21-month construction process. Hundreds of people across Ontario were employed in every aspect of the GRS project – from manufacturing and assembly of the solar panels and inverters, to site construction, installation and project operations. An average of 300 workers, and a peak of more than 600 workers, were on site during construction, including local subcontractors that were utilized for various aspects of the project. The GRS project, which incorporates solar panels manufactured in London, Ontario by Canadian Solar Inc. and inverters made in Toronto, Ontario by SMA Canada Inc., produces enough clean energy to meet the needs of more than 17,000 households.

“This financing is the culmination of hard work over many years with our partners, Connor, Clark & Lunn Infrastructure and Six Nations. We are very pleased that the bond financing for this landmark project has now been completed,” said Steve Cho, President, Samsung Renewable Energy. “This is among the largest operating solar energy projects of its kind in Canada, and has created significant economic benefits for the Province of Ontario. Samsung is dedicated to continuing to deliver meaningful economic benefits to communities where we are building clean, renewable energy projects.”

Compared to coal-fired generation, each year the GRS project will offset approximately 162,000 tonnes of CO2, the equivalent of taking 29,610 cars off the road. The solar power generated at GRS is being sold to the Independent Electricity System Operator (IESO) under a power purchase agreement.

Samsung Renewable Energy is creating clean, renewable energy for generations to come. Together with our partners, Samsung is making a $5-billion investment in Ontario to create the world’s largest cluster of wind and solar power. Our investments will create 900 direct renewable energy manufacturing jobs and 9,000 high-skilled jobs in Ontario. Built on Samsung C&T’s commercial and technical expertise and the success of its renewable energy projects in several countries – including the United States and Europe – Samsung is creating real jobs, through real investment, benefitting real people. For more information, please visit www.samsungrenewableenergy.ca.

About Six Nations of the Grand River Development Corporation

Six Nations of the Grand River Development Corporation (SNGRDC) represents Six Nations’ interest on 13 mid-to-large scale energy projects in Southern Ontario. SNGRDC’s primary mandate is to generate revenues to be used for the benefit of the Six Nations community collectively. Through its solar and wind partnerships, SNGRDC participates in the generation of 868 MW of renewable energy. SNGRDC believes investing in sustainable and environmentally friendly energy will not only brighten our future, but the future of our coming generations. For more information, please visit www.sndevcorp.ca.