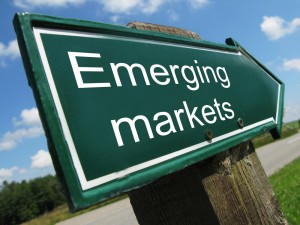 Emerging markets funds are increasing marketshare of the global private equity fundraising pool, accounting for 15% of new commitments globally in 2011, up from 11% in 2010, according to data from the Emerging Markets Private Equity Association (EMPEA).

In 2011, China drew its largest share of global private equity fundraising to date with 43% of capital raised or US$16.6 billion. Local currency funds in China dominated in 2011, with Renminbi funds accounting for 60% of the 63 funds focused on China and one-quarter of all 148 emerging market funds raised in 2011, versus 18% in 2010, according to EMPEA data.

According to EMPEA, Brazilian funds raised a record US$7 billion in 2011, or 18% of the total new capital committed to emerging market funds. EMPEA’s president and CEO, Sarah Alexander said in a statement: “The surge in appetite among investors for exposure to Brazil has been one significant aspect of the fundraising recovery in the emerging markets.” Nearly all (95%) new capital raised for Brazil in the last year went to five funds, each of which raised US$1 billion or more and together accounted for US$6.7 billion.

Alexander added that while some may argue the top line figures for Brazil and China are indications that the markets are reaching a saturation point, EMPEA believes the middle market in Brazil, as in many other emerging markets, lacks access to financing generally and that fewer and fewer established funds are scaled to pursue those opportunities as fund sizes grow.

EMPEA’s 300 members represent nearly 60 countries and over US$1 trillion in assets under management.

Scroll down the slideshow to find out more about how emerging markets private equity did in 2011 from EMPEA. 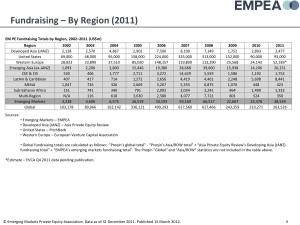 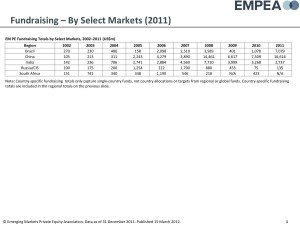 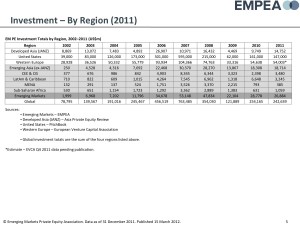 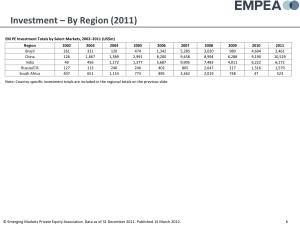 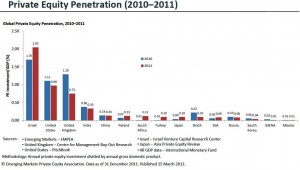 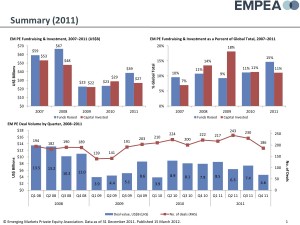