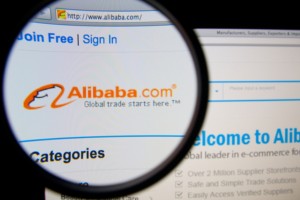 Alibaba gave investors a closer look at the scale and growth of the Chinese e-commerce juggernaut in an initial public offering (IPO) prospectus filed on Tuesday, the first step in what could be the largest technology debut in history.

Alibaba Group Holding Ltd, which powers 80 percent of all online commerce in the world’s second-largest economy, is expected to raise more than $15 billion, and could top the $16 billion pulled in by Facebook Inc when it listed in 2012.

The bulk of the proceeds will go to Yahoo Inc – which bought a 40 percent stake in Alibaba in 2005 for $1 billion and which must sell more than a third of its current 22.6 percent stake through the IPO. Alibaba also plans to sell new shares, people familiar with the plans have said, to bulk up a cash war chest depleted by a rash of recent acquisitions.

While the Alibaba brand is less well known in the United States than Internet companies such as Amazon.com and Facebook, the Chinese company’s listing has stirred the most excitement in Silicon Valley and Wall Street since Facebook’s record IPO. Alibaba will become the largest Chinese corporation to list in the U.S. – on either the New York Stock Exchange or the Nasdaq.

Alibaba will debut later this year in a market where high-flying tech stocks like Twitter and Amazon have fallen in recent weeks in a sell-off that has divided analysts and investors, reviving doubts about soaring tech valuations.

Still, estimates of Alibaba’s market value have soared in recent months, to even beyond $200 billion, underscoring Wall Street’s eagerness to take a crack at a massive Chinese company with robust growth.

Alibaba handled more than 1.5 trillion yuan – about $248 billion – of transactions for 231 million active users across its three main Chinese online marketplaces in 2013, more than Amazon and eBay Inc combined. It did so with 20,884 full-time workers, fewer than eBay.

“If it’s able to transport that kind of power to outside China, it has the potential to become a true global e-commerce powerhouse,” said Roger Entner, lead analyst and founder of Recon Analytics. “Everybody thought Amazon could do it, but now we have to re-think Amazon in the light of being the most successful company in that field in the U.S. – but not in the world.”

Alibaba did not give any hints in its IPO prospectus about potential plans for the U.S. e-commerce market. Analysts said it was unlikely Alibaba would adopt the model favored by Amazon, which sells goods directly to consumers using a sprawling network of warehouses.

Alibaba, founded 15 years ago in a one-room apartment in Hangzhou and controlled by a 28-member partnership, boasts of building a company that will last “at least 102 years.”

After the IPO, Alibaba said, the partnership will have the exclusive right to nominate a simple majority of the members of its board of directors.

Alibaba operates an online messaging service as well as a cloud computing business, but more than 80 percent of its revenue comes from its Taobao, Tmall and Juhuasuan online marketplaces. Top items sold on Taobao include prepaid phone and game cards as well as lottery tickets, home furniture and baby products, the company said.

Total revenue increased 62 percent to 18.75 billion yuan ($3.01 billion) in October-December of 2013 from a year earlier, while net income more than doubled to 8.27 billion yuan, according to the prospectus.

Some analysts say Alibaba’s rapid pace of revenue growth may be unsustainable.

“They got into the e-commerce space when there weren’t any other players in China,” said Forrester analyst Kelland Willis, adding Alibaba has been “losing market share year over year.”

By 2020, online retail sales in China will reach $420-$650 billion, as much as the United States, Japanese, UK, German and French markets combined, according to a recent analysis by McKinsey Global Institute.

Alibaba said China’s mobile Internet arena, where it is battling Tencent Holdings for supremacy, is the next growth industry. China will have an estimated 750 million mobile Internet users by 2017, according to data from China-based consultancy iResearch.

Roughly one-fifth of all purchases in the last quarter of 2013 were made on mobile devices, up from 7.4 percent a year earlier. But Alibaba added that for now these sales were less profitable than those made on its website.

Already this year, Ma has been involved in acquisitions worth more than $3.5 billion – buying a stake in department store operator Intime ; a majority shareholding in movie producer ChinaVision Media; control of online mapping firm Autonavi ; a stake in China’s Wasu Media Holding Co Ltd for online content and internet TV; and a stake in Youku Tudou Inc, an online video business akin to Google Inc’s YouTube.

Also this year, Ma has set up a charitable trust estimated to be worth $3 billion, potentially Asia’s biggest, focusing on the environment and health. “It’s impossible for me to be a doctor, but I can have my own way to save lives,” Xinhua quoted Ma as saying.

Some analysts have pointed to a less-than-transparent decision-making process after Alibaba spun off fast-growing Alipay in 2010 – a move that caused consternation at major shareholders Yahoo and Japanese telecoms firm SoftBank Corp .

Alibaba’s prospectus also laid out a raft of regulatory risks it faces at home. The company stressed that Beijing could impose additional restrictions on the use of Alipay, the payment service that powers the majority of its online transactions.

Unlike many prominent U.S. tech IPOs of recent years, Alibaba’s list of significant shareholders is short. By contrast, Facebook and Twitter each broke out shareholdings from more than a half dozen individual principal shareholders.

Former English schoolteacher and lead founder Jack Ma owns 8.9 percent of Alibaba. Joseph Tsai, a co-founder and executive vice-chairman, is the only other individual with a disclosed shareholding, of 3.6 percent. Yahoo and SoftBank, respectively, own 22.6 percent and 34.4 percent of Alibaba on a fully diluted basis.

The proposed IPO of $1 billion in the filing is an estimate for calculating exchange registration fees.

Alibaba estimated its fair value as of this month could reach $50 per share, an increase of more than six times from the $8 a share value estimated in June 2011, according to the prospectus. This calculation helps determine employee compensation and does not necessarily represent a likely IPO price.

At the most recent fair value estimate, Yahoo’s stake in Alibaba is worth $26.2 billion and SoftBank’s almost $40 billion. Ma’s stake would be worth $10.3 billion.

The fair value estimate puts Alibaba’s size at $116.1 billion, well below the $152 billion average from 25 analysts in a Reuters survey.

While Yahoo and SoftBank may be among the biggest beneficiaries of the IPO, neither will exercise much control of Alibaba. It has already been agreed that Yahoo Chief Development Officer Jacqueline Reses will resign from Alibaba’s board upon the listing, while SoftBank will have the right to nominate just a single director to a new, nine-member board.

Alibaba’s decision to list in the United States was a blow to the Hong Kong stock exchange, which was initially its preferred IPO venue, but the city’s regulators balked at any potential violation of the “one-share-one-vote principle.”