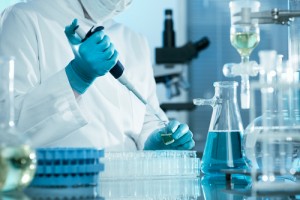 Cinven, which last month bought French medical diagnostics provider Labco (LABCO.PA) for 1.2 billion euros, beat Apax-owned Unilabs and buyout group EQT in the auction, and a deal may be announced later this week, they added.

BC Partners made a return of 2.7 times on the sale, one person familiar with the deal said.

Synlab and Labco will be combined, one of the sources said, adding that the two companies have little overlap and cost cuts are not driving the transaction.

Cinven will use the combined platform to drive growth in a fragmented European laboratory industry.

“There is potential in Europe for two lab services providers with 2-3 billion euros in sales,” Synlab’s Wimmer said at the time.

The 4.5 billion euro German laboratory market – with standard blood and urine tests accounting for the bulk of services – offers relatively low prices compared with elsewhere in Europe, but is also more consolidated and cost-efficient.

The Augsburg-based company is expected to post earnings before interest, tax, depreciation and amortization (EBITDA) of about 145 million euros this year and the deal values it at roughly 12 times that, the sources said.

Peers like Sonic and Quest (DGX.N) trade at multiples of 11.9 and 8.8 times their expected earnings respectively.

The range for the deal’s enterprise value of 1.7-1.8 billion euros mainly stems from different estimates of net debt at the time of closing the deal, one of the sources said.

The acquisition is expected to be backed with around 1 billion euros of debt, in the form of high yield bonds, banking sources said.

Rothschild advised BC Partners on the deal, while Barclays advised Cinven, the sources said.