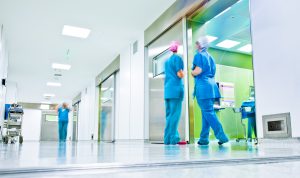 Clearlake Capital Group is evaluating strategic options for Symplr, a provider of healthcare governance, risk and compliance software, according to five sources familiar with the matter.

Less than two years into its investment, the Santa Monica, California, firm is exploring a minority stake sale or 50-50 joint ownership transaction that brings in another private equity group, sources said.

William Blair and Goldman Sachs are providing financial advice on the process, the sources said.

The sellers are expecting a potential transaction to value the Houston company around $2 billion, some of the people said. Based upon Symplr’s approximately $80 million in EBITDA, that would imply a multiple of about 25x.

Clearlake in October 2018 agreed to buy Symplr in a transaction valuing the provider of healthcare-credentialing software at about $550 million, PE Hub wrote. SkyKnight Capital co-invested in the deal.

The company was previously backed by Pamlico Capital and CapStreet Group.

Its growth has been driven in part through M&A.

The process for Symplr follows more than one high-profile deal in healthcare technology, with assets showing resilience through the downturn continuing to command premium valuations.

In one of the sector’s largest deals of the year, Leonard Green & Partners bought a 50 percent stake in WellSky from TPG. The deal valued the healthcare software company north of $3 billion, surpassing a 20x EBITDA multiple.

In June, ICONIQ Capital, known for its ties to tech billionaires such as Facebook CEO Mark Zuckerburg, joined Francisco Partners as an investor in QGenda. At a $1.05 billion valuation, the deal commanded more than 26x the workforce management company’s approximately $40 million in EBITDA.

Clearlake and Goldman Sachs declined to comment. Skyknight, Symplr and WellSky did not return requests for comment.