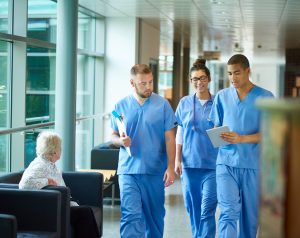 The agreement values the healthcare technology and services provider north of $500 million, some of the people said. The sell side marketed EBITDA of approximately $30 million, with synergized EBITDA likely viewed in the mid-$30 million range, they said.

PE Hub wrote early this month that a Harris Williams-run sale process was underway for the Dallas company, identifying Symplr as one of a few logical buyers with the operational wherewithal to turbocharge TractManager’s low- to mid-single-digit growth rates.

GHX, a portfolio company of Temasek, was also in the running, sources said.

Adding complexity to the process, Clearlake was recently evaluating options for Symplr, a provider of healthcare governance, risk and compliance software. PE Hub wrote in July that the Santa Monica firm was considering a minority stake sale or 50-50 joint transaction for Symplr in which it would bring on another PE firm.

It remains unclear if that process has officially been put on pause amid the TractManager deal, however sources said discussions had more recently shifted to a potential minority stake sale. Initial value expectations for Symplr were as high as $2 billion, but sources said price talk was later walked down.

For Symplr, the deal is its latest move to built out a broader software platform in the healthcare GRC arena.

In other related activity in the GRC space, RLDatix, a portfolio company of TA and Five Arrows Principal Investments, has remained active on the M&A front. RLDatix on Wednesday announced its acquisition of Verge Health, expanding its software offering further beyond safety and compliance and into physician credentialing.

Clearlake and GHX declined to comment. Symplr, Arsenal, TractManager and Harris Williams did not return requests for comment.