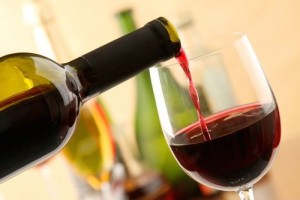 Monomoy Capital Partners and Cortec Group turned in two of the strongest performances among 58 domestic buyout, growth and turnaround vintage 2011 funds in the Buyouts return database.

The No. 2 returner in the 2011 vintage was Lone Star Fund’s seventh vehicle, which was producing a 53.2 percent IRR as of year-end for backer Los Angeles City Employees’ Retirement System.

Cortec Fund V’s success is attributed to “all but one of the investments being at cost, above cost or materially above cost,” with Yeti Holdings being particularly rewarding, said Dave Schnadig, managing partner at Cortec Group, which backs mid-market U.S. and Canadian companies operating in specialty health care, consumer products, and business products, distribution and services.

Schnadig declined to comment further on Yeti Holdings, a maker of coolers. But according to the Wall Street Journal, Cortec Group acquired a two-thirds stake back in 2012 for $67 million. That investment could be valued at $3.3 billion in a looming IPO, the story said.

These funds led the pack in a strong 2011 vintage. All told, the domestic buyout and turnaround vintage 2011 funds (excluding growth equity) in the Buyouts return database generated a top-quartile IRR of 20.3 percent, a median IRR of 13.7 percent and a bottom-quartile IRR of 7.6 percent (for the most part through year-end 2015).

That puts the 2011 vintage comfortably ahead of the median performance of our entire database of 826 such funds spanning vintages 1981 to 2011. Despite the solid performance, however, 2011 falls short of vintages 2000-2003 and 2009. The 2011 vintage funds also outperformed their 2010 counterparts, according to Buyouts data.

“In 2010, coming off the financial crisis, we saw people still being more cautious in terms of putting deals on the market and buying deals,” Christian Kallen of Hamilton Lane told Buyouts. “In 2011 and 2012, we went back to a more active market.”

“This is not going to explain 400 or 500 basis points of outperformance, but you get maybe 40 or 50 basis points from that,” he said, adding: “There are a lot of variables playing into this, so it’s hard to put a finger on what’s driving it.”

Overall, Buyouts analyzed the performance of more than 2,600 private equity funds and placed them into 18 categories, including domestic and international buyout, turnaround, growth equity and mezzanine funds, as well as funds-of-funds, co-investment funds and secondary funds.

Younger funds of vintage 2012 and later were excluded to avoid the J-curve effect, in which early management-fee draws weigh down returns, rendering the performance data less meaningful. (See the accompanying table of top-quartile and second-quartile domestic buyout, turnaround and growth equity funds for full details on our methodology.) 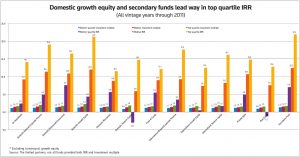 Domestic buyout funds, our largest category with more than 700 funds covered, generated the third-highest top and median-quartile IRRs, 19 and 11.4 percent, and the leading bottom-quartile IRR, 7.6 percent.