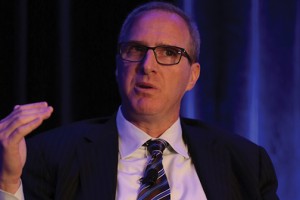 TPG caps its capital-call facilities at nine months, well short of the two- and three-year facilities that have become a flashpoint for debate among LPs.

“We use leverage in a relatively modest amount,” said Coslet, whose firm manages more than $73 billion. “In our [limited partnership agreements], we have a maximum usage of nine months for any drawdown of leverage for any particular investment. So we’ll use the leverage facility for anywhere between three months, six months, nine months.”

General partners take out lines of credit against committed investor capital to ease the process of paying for new assets. Rather than rushing to call down their limited partners’ capital for each investment, the firm uses the credit facility to pay for the new asset. Then they use investment capital called from the fund to pay down the line of credit.

In the past, the duration of such loans was 90 or 180 days. That’s enough time to call capital, but not enough to really affect the fund’s long-term performance.

In recent years, private equity firms have been extending the duration of capital-call facilities to as long as two years, or even as much as three years, though that is rare, sources have told Buyouts. This shortens the duration of the investment for fund LPs, driving up the investment’s internal rate of return.

Some LPs like the higher IRR, but others are turned off by the risks associated with holding assets with uncalled capital.

“The issue you’re putting on the table for the LPs is, God forbid underlying values [decline] … you could theoretically have defaults on your fund. And that’s problematic,” Coslet said.

It’s also made it difficult for LPs comparing the returns of different funds. Data sources typically don’t disclose which funds are using capital-call facilities, and for how long.

“You have to look at the individual deals, unlevered,” said one LP. “From a high-level viewpoint, it makes it a lot more difficult.”

Ultimately, LPs will have to separate an investment’s returns with or without the capital-call-facility leverage to get “apples-to-apples returns” in comparing fund performance, Coslet said.

In June, the Institutional Limited Partners Association released new guidelines for GPs, suggesting firms tell their LPs how and when they plan to use the credit facilities.

Jonathan Coslet of TPG at PartnerConnect West in 2013