The number of companies in the Standard & Poor’s Weakest Links  report hit a seven-year high, with 85 private-equity-backed firms making the list. The affected debt fell 5 percent, however, to $142.9 billion from $149.9 billion since the quarterly report last ran.

S&P also highlights PE-backed companies that have defaulted or filed bankruptcy. Along with the weakest links, the default list continued to grow, to 26 from 18, while PE-backed bankruptcies grew to eight from six.

The energy sector led the way on the default list, as it continues to struggle with weak oil prices. Twenty-one of the 34 companies that have either defaulted or filed for bankruptcy belong to the energy industry.

Overall, energy and power constituted 45 — nearly 38 percent — of the 119 companies on the weakest-links default and bankruptcy lists, by far the most of any industry.

SandRidge Energy Inc, the Oklahoma City oil-and-gas exploration-and-production company, received a default rating on May 16 after filing a voluntary petition under Chapter 11 of the U.S. Bankruptcy Code. SandRidge is backed by Carlyle Group and has affected debt of $4.7 billion.

Fieldwood Energy LLC received a selective-default rating on June 16 after participating in a distressed exchange. Riverstone Holdings, Fieldwood’s sponsor, purchased a large portion of the Gulf Coast oil-and-gas developer’s debt at a steep discount. Fieldwood has more than $3 billion in debt.

Permian Resources LLC also picked up a selective-default grade, on May 13, when it engaged in a distressed exchange of its junior subordinated notes. Permian, jointly owned by Energy & Minerals Group and First Reserve, has about $1.5 billion in debt.

All told, 245 sponsored and non-sponsored companies were on the list. The entire list has aggregate affected debt of about $316 billion.

To make the weakest links list, companies must have had speculative corporate-credit ratings of B- or lower with either a negative outlook or a negative CreditWatch implication on June 20.

From 1981 to 2015, an average of 7.2 percent of all global entities rated B- defaulted within 12 months, and the average default rate was much higher for entities rated lower than B-. 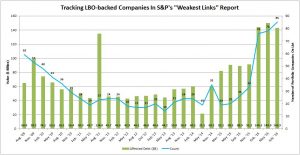