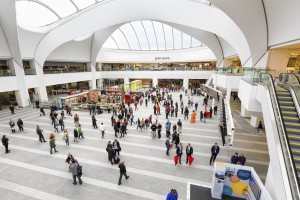 Toronto, Canada (February 12, 2016): Canada Pension Plan Investment Board (CPPIB) announced today that it has entered into an agreement to form a 50:50 joint venture with Hammerson in relation to the Grand Central Shopping Centre (Grand Central) in Birmingham, U.K. CPPIB’s total acquisition cost for 50% of Grand Central will be £175 million.

“Through this joint venture, we are once again demonstrating our long-term commitment to the U.K., and in particular, to regional markets around the country,” said Andrea Orlandi, Managing Director and Head of Real Estate Investments, Europe, CPPIB. “In addition, we are pleased to expand our strong relationship with Hammerson and look forward to working with them to deliver a world-class shopping destination in Birmingham.”

Grand Central is already home to a number of top U.K. retailers, and offers 40 premium stores and 20 casual dining brands. The shopping centre sits above the redeveloped New Street Station which, with Grand Central, now makes up a world-class ‘gateway’ to the heart of the city and is the busiest train station outside of London, expected to see footfall of over 55 million passengers annually.

About Canada Pension Plan Investment Board

Canada Pension Plan Investment Board (CPPIB) is a professional investment management organization that invests the funds not needed by the Canada Pension Plan (CPP) to pay current benefits on behalf of 19 million contributors and beneficiaries. In order to build a diversified portfolio of CPP assets, CPPIB invests in public equities, private equities, real estate, infrastructure and fixed income instruments. Headquartered in Toronto, with offices in Hong Kong, London, Luxembourg, Mumbai, New York City and São Paulo, CPPIB is governed and managed independently of the Canada Pension Plan and at arm’s length from governments. At December 31, 2015, the CPP Fund totalled $282.6 billion. For more information about CPPIB, please visit www.cppib.com or follow us on LinkedIn or Twitter.