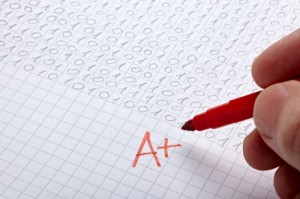 Crowdmark to save teacher marking time and government dollars

TORONTO, June 11, 2013 /CNW/ – Crowdmark Inc., a Canadian education technology start-up, is positioned to save cash-strapped Departments of Education millions by making massive-scale testing more efficient. Crowdmark has raised $600,000 in seed funding through the University of Toronto Early-Stage Technology (UTEST) program, MaRS Innovation and U of T’s Connaught Fund, among others.

The Crowdmark assessment interface, informed by decades of teaching experience and research by company co-founders, James Colliander (Professor of Mathematics) and Martin Muñoz (Researcher and Developer), at the University of Toronto, streamlines the complicated and time-consuming grading workflow for teachers. Crowdmark archives student work and all grading feedback into individual digital portfolios that students and parents may access any time online and via mobile devices.

In May 2013, Grade 3 and Grade 6 teachers at Toronto District School Board’s Golf Road Junior Public School successfully used Crowdmark to score a mock EQAO pilot exam. Teacher feedback emphasized the Crowdmark’s ease-of-use and flexible feedback tools for a range of question types. According to one participant, “There is no comparison between Crowdmark and pen and paper assessment. I was able to mark three times the amount of student work in less than a third of the time it would have taken me if those tests had been in front of me with a pen in my hand.”

That result builds on a 2012 pilot in which a team of 147 skilled markers from eight Canadian universities used Crowdmark to mark 46,424 hand-written mathematics contest problems appearing in the 2012 Canadian Open Mathematics Challenge (COMC). Markers completed their assessments in half the time compared to the 2011 red pen on paper effort. The pilot was completed in partnership with the Canadian Mathematical Society and the COMC Partner Universities.

Based in Toronto, Ontario, Canada, Crowdmark is a high-technology start-up. Crowdmark builds tools that help teachers to teach and students to learn better. Crowdmark launched in 2012 through the University of Toronto Early Stage Technology (UTEST) program. Crowdmark has received $600,000 in seed-stage investments from MaRS Innovation, the University of Toronto, the RIC Centre Venture Start and the Ontario Centres of Excellence Market Readiness. Learn more: www.crowdmark.com.