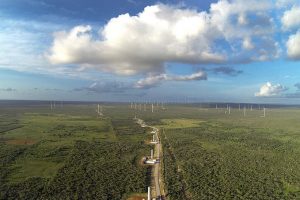 Cubico Sustainable Investments has bought two Brazilian wind farm complexes from Casa dos Ventos for R$2 billion (US$494 million), including debt. The deal, the investor’s first in Brazil, includes plants with 392 megawatts of capacity in Pernambuco and Piauí states. London-based Cubico also announced that it has opened an office in São Paulo to evaluate additional opportunities. A renewable energy and water investment platform, Cubico was launched in May 2015 with the backing of Ontario Teachers’ Pension Plan, Public Sector Pension Investment Board (PSP Investments) and Banco Santander SA.

The company opens an office in São Paulo to evaluate investment opportunities in the Country as well as in the other Latin America markets such as Peru, Colombia, Uruguay, Panama and Costa Rica

Sao Paulo, 13 January 2016 – One of the global leaders in the renewable energy sector and water investment, Cubico Sustainable Investments (Cubico) announces the opening of an office in São Paulo and the acquisition of two wind farm complexes from Casa dos Ventos, in a transaction done late last year and considered to be the largest one involving wind farms in operation in Brazil in 2015. This is the first investment by Cubico in Brazil and includes the Caetés plant (182 MW) in Pernambuco state, and the Ventos do Araripe I plant (210 MW), in Piauí state. The investment, including assets and debt taken on, is approximately R$2 billion (base date 31/12/2015), which now belong to and are administered by Cubico. The transaction has been approved by Brazil’s antitrust body, CADE.

Founded in May 2015 and headquartered in London, Cubico is an investor and manager of long-term global assets in renewable energy and water investments, belonging to three investors: Banco Santander SA; the Ontario Teachers’ Pension Plan (OTPP); and Canada’s Public Sector Pension Investment Board (PSP Investments). With the completion of the transaction to acquire two wind farm complexes from Casa dos Ventos, Cubico adds 392 MW to its portfolio in Brazil which, added to the existing 223 MW (transferred from Santander’s former global portfolio of renewable energy assets), means the company has 615 MW of operating wind assets in Brazil and makes it the thirdlargest player in the wind energy sector in the country, according to the industry body ABEEólica.

According to Ricardo Díaz, Head of the Americas at Cubico, the investment demonstrates Cubico and its shareholders’ commitment to Brazil, to Latin America and to the renewable power generation sector in the region. “We will further analyse opportunities in Brazil and elsewhere on its own merits. Besides Brazil, Cubico is currently focusing its origination efforts in Latin America on investments in Mexico, Uruguay, Peru, Colombia, Panama and Costa Rica,” says Díaz.

Eduardo Klepacz, Head of the Brazil division at Cubico, adds: “The transaction positions Cubico as an investor that is committed to Brazil. We are able to capitalize on opportunities due to our long-term strategy that allows us to maintain and manage assets for a period of between 20 and 40 years. We believe in the renewable energy generation sector in Brazil and with the new office in São Paulo we are pursuing investment opportunities not only in the country, but also in other regions of Latin America, such as Peru, Colombia, Uruguay, Panama and Costa Rica.”

To move forward with its growth plan, Cubico counts on an experienced management team in the Latin American market. Besides Brazil, the company currently operates six other plants in Latin America, in countries like Mexico, where it holds five wind farms in development with 799 MW capacity and Uruguay, where it has a wind farm with a total capacity of 50 MW.

About Cubico
Founded in May 2015, Cubico Sustainable Investments started out as a major player in the renewable energy sector and water infrastructure assets. A spin-off of Santander’s global investment business in renewable energy and water infrastructure, the company is currently held by Banco Santander, OTPP and PSP Investments, which have come together to maximize the growth of the business. The portfolio held by Cubico globally originally comprised 19 assets in seven countries, worth an estimated US$ 2 billion-plus, with an installed capacity of 1.4 GW. The company has a presence in different geographical locations, such as Brazil, Mexico, Uruguay, Italy, Portugal, Spain, Ireland and the United Kingdom. Cubico is headquartered in London and has offices in São Paulo (Brazil), Milan (Italy) and in the Federal District of Mexico. In Brazil, besides its head office in São Paulo, Cubico has one operational center in Fortaleza (Ceará state), which will be expanded locally as the company gets more assets under management.

www.cubicoinvest.com
For further information, or to arrange an interview, please contact: