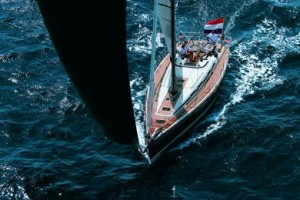 Some sad news today that Dayton Carr, 78, considered one of the founders of the private equity secondaries market, died peacefully at his home on April 7. Dayton formed Venture Capital Fund of America in 1982.

Outside of secondaries, Carr was a sailor who supported U.S. sailing and the U.S. Olympic Sailing program. Read more.

I forgot to link a story yesterday (I blame the Mondays). Check out Milana Vinn’s story about private equity firms setting up virtual summer internships.
Early: You’ve heard of funds missing their deadlines for first closings on fundraisings due to sluggish processes for whatever reason. But have you heard of firms accelerating first-closings? That’s a new one for me and a few other folks in the industry.

Spectrum Equity, which is engaged in one of the few in-demand fundraisings right now, held an early close on its ninth fund after requests from a few LPs to close early, sources told me. Spectrum Equity IX is targeting $1.25 billion with a $1.5 billion cap.

The firm had scheduled a first and final close in May, but decided to hold an earlier interim close to held certain LPs lock in their commitments, sources said. It’s not clear why the LPs wanted to close early. A few sources speculated LPs may want to lock in commitments before their investment committees shut down investment activity as liquidity tightens in the downturn.

It’s a real concern, as we saw with the Pennsylvania state workers pension board, which last week rejected a $50 million commitment recommended by its investment staff and investment consultant. “Mostly you think of the GP rushing LPs along; LPs rushing the GP along is not that common,” said a fund formation lawyer with no connection to the fundraising. “Investors may be asking sponsors to close so that they didn’t have to go back and re-underwrite [the commitments] to their investment committees.”

Kirk Falconer sat down with Darren Abrahamson, who leads Bain Capital Tech Opportunities Fund, on the current environment. The tech fund is set to raise $1.1 billion, Buyouts reported in October. Below is a sample of the interview. Read the full piece here:

How will the covid-19 pandemic impact tech deal-making?

The speed at which the pandemic hit the market has created a high degree of uncertainty. Customers are scaling back on tech spending for the first time in a long time. The effects are diverse and tech companies will be impacted differently. The shock to the system will force corrections, with some businesses needing to run themselves differently in a tougher macro environment. This will include a requirement to improve capital efficiency.

In the short-term, I think we will have a quieter deal landscape. In the longer-term, there will likely be lower valuations. In addition, as we come out of this downturn, we expect to see some truly high-quality tech companies emerge, rather than just companies that are growing with the rest of the market.

Bain’s tech fund has the luxury of not having a legacy portfolio. That allows us to focus on the offense, getting ahead of trends and helping tech companies adapt operationally to a new reality. We have capital to deploy, so there will be no constraints on us in funding interesting opportunities.

Top Scoops
K1 Investment Management is set to generate 26.1x its money on its sale of cybersecurity software provider Checkmarx, writes Milana Vinn on PE Hub. Both K1 and fellow investor Insight Partners rolled over a portion of their equity to remain minority holders in the company, Milana writes. Read more.

Have a great day! Stay safe and healthy. Hit me up as always with tips n’ gossip, feedback or just to chat at cwitkowsky@buyoutsinsider.com, on Twitter or find me on LinkedIn.