Record capital overhang, increased competition and perpetually high valuations are afflicting this market, and buyers are struggling to deploy capital on worthy investments.

But enterprising firms can use current economic conditions as an opportunity to modernize their deal-sourcing strategy and stand out among the competition.

Intelligent Automation — or more colloquially, using robots — is often touted as the future of the manufacturing sector, but similar concepts can be applied to M&A deal sourcing.

In fact, firms today can employ these robots to facilitate deal sourcing and relationship building by means of integrated data sources and automated alert systems, which provide innumerable cost and time-saving benefits.

As we progress into our intelligent future, the question becomes: How can these robots advance M&A deal sourcing for tomorrow?

To begin, let’s assess intermediary activity over the most recent three-year period by revisiting Sutton Place Strategies’ 2016 Forgotten Mid-Tier analysis. The mid-tier is defined as a sell-side adviser that closes between four and 20 deals to sponsor buyers a year, or an average of one to five per quarter.

Previously, SPS reasoned that the mid-tier is a great resource due to its accessibility. Moreover, these sell-side advisers are attractive serial sources of continuous deal flow, given that 61% typically ran limited or moderate closing processes in 2017, per the SPS Sell-Side Process Index.

If relevant to your industry and size strategy, these are excellent intermediaries to evaluate and add to your community. If you had sorted through this data in 2015 and applied automated practices, you would still be actively benefiting from their consistent deal flow. By the way, how are you handling this work today?

To streamline and amp your deal sourcing, the secret lies in the robot’s ability to repeatedly transform raw data into actionable intelligence. This includes instituting alerts to inform you of a sell-side adviser’s pertinent activity, such as:

From this telling list of alerts, robots can help build an assembly line for cultivating superior sourcing relationships. Efficiently sustaining relations with these firms is critical, as they have the potential to provide better deal selection, which often equates to better returns. 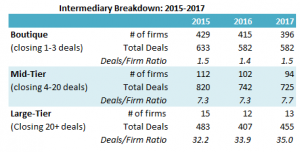 Keeping tabs on these ~45 mid-tier banks may not sound discouraging; however, there are certainly boutique intermediaries from 2015 that would fit your strategy, as well.

The holy grail of high-tech robots is for alerts that proactively advocate next steps, based on your relationship with an intermediary.

Using data integrated from various sources, including a CRM, will enhance the robot’s recommendations, including whether to email or call based on your last encounter with the firm. The alert, perhaps equipped with a phone number or email address, will make it easier to immediately act on the information when it’s received, as opposed to adding it to your ever-growing to-do list.

As with other types of machine learning, the robots will advance as your utilization and integration of data sources increases. It’s fascinating to consider the potential of robots, especially as they learn more about your deal-sourcing process and eliminate your involvement in the more mundane and tedious activities.

Predicting when this market will turn in favor of investors is a fruitless endeavor. And even if this market were favoring buyers, automating raw data into practical intelligence is a sound business practice.

Before attempting to outbid your competition on your next IOI, seriously consider integrating robots into your strategy and refocusing your valuable attention on the parts of deal sourcing that can’t be automated and still require human cognitive ability.