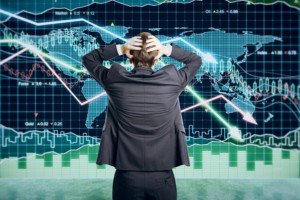 The dead week will be worrying for a banking industry that relies on bumper January issuance to get off to a profitable start for the year. Bankers are concerned that the turmoil may have badly affected issuer confidence, which could prolong the current hiatus even if markets turn around.

“It’s so frustrating,” said a European debt capital markets syndicate manager. “There will be a window of stability and we’ll jump on the phone to issuers to prompt them to go, but they’re still scared.”

No asset class was immune from the contagion. Even the US investment grade corporate market, which normally holds up well during times of market turmoil, was effectively closed as CDX IG25 spreads reached a three-year high on Wednesday. Just tranches came to market – bonds from Lloyds Banking Group and Transcontinental Gas Pipe Line together raised US$2.2bn – after 33 tranches came the previous week.

In Europe, no investment grade corporate bonds printed at all as issuers chose to sit on the sidelines after seeing spreads widen. The region’s corporate debt markets have only seen 5.2bn of bonds priced so far in January, the worst start to a year since 1999.

January is typically a busy month for corporates in the US and Europe as they make the most of what is a traditionally liquid time in the market to raise funding. But recent transactions have not gone smoothly, leading many to sit out the storm.

Telecom Italia, one of only four borrowers seen in the European IG market this year, was forced to pay up for its 750m eight-year deal on January 15, with the deal being priced at mid-swaps plus 305bp. A deal that was the same size and tenor was priced at plus 275bp a year earlier. Despite the premium, the bonds have widened since pricing.

Even AB InBev bonds, which attracted a record US$110bn order book last week, were trading as much as 20bp wider compared with initial pricing across the curve on Wednesday amid the market turmoil.

“Many corporates have used the tight spreads on offer over the last few years to refinance and extend their liabilities,” said Paul Suter, fixed income trader at ECM. “The only people that would come to the market now are those that really have to.”

“From an issuer’s perspective spreads are at the wide end of recent ranges and they will be less willing to pay these levels. If you come now you will be having to pay a premium on top of wider spreads.”

Unsurprisingly, the high-yield space, which has been a focus for investor unease in recent weeks because of a possible rise in default rates, saw no deals. Spreads continued to widen, with those on US Triple C rated bonds reaching a six-year high and the CDX HY at a three-year high.

Emerging markets were likewise badly affected. Although several sovereigns spoke about plans to come to market, only the Emirate of Sharjah dipped its toe into the water with a US$500m five-year sukuk. Latin America saw nothing but Asia bucked the trend with several new issues, though they were primarily local affairs.

A collapse in oil prices and poor economic indicators out of China were blamed for the turmoil but many felt the let-off in steam was unsurprising.

“It’s a slightly overdue correction,” said an EM banker, who added that issuers and investors shouldn’t become too pessimistic as fundamentals remain resilient. “We know markets will be volatile but cash balances are still there [for potential investment].”

There were pockets of optimism in some parts of the capital markets, not least in the quantitative easing-supported European sovereigns, supranationals and agencies markets, where a handful of trades printed.

Equities provided a mixed picture. In the US, equity capital markets are in full retreat. There are five companies currently marketing IPOs, though they are lower quality and are seeing limited investor demand.

In the last few days, sub-prime online lender Elevate Credit elected to postpone its offering ahead of pricing, while civil engineering company Shimmick Construction had to extend marketing of its IPO.
Bankers are saying that this could be the first January in seven years without a US IPO pricing.

It was a different story in Europe, where despite the poor state of secondary markets, a number of new issues were launched last week. Bankers are hopeful that lengthy execution periods will play in their favour, and that markets will brighten before final pricing.

Bookbuilding began on Monday for the up to £449.2m IPO of Clydesdale and Yorkshire Banking Group. The deal makes an ideal first IPO in Europe this year as seller, National Australia Bank, is keen to be rid of its UK venture – and is consequently flexible on pricing.

“Investors are not closed for business provided you bring them the right companies,” said Alain Dib, head of ECM for EMEA at BNP Paribas. “There are still good memories from last year’s IPOs which generally outperformed the market and they have cash to deploy. But we need to remember that when investors tell you in early-look meetings that they are interested, they are not giving you an order. Yet.”

“IPOs are normally a four-week process and a month is a long time in the market; sentiment can change,” he said. “Currently, investment sentiment is volatile, it’s not a clear direction of travel.”

Other deals are being driven by a need to raise funds as soon as possible. Oilfield services company Technip raised 375m from five-year convertibles on Wednesday, following on from cash calls by CGG and Saipem totalling 3.85bn.

Similarly, a 275m capital increase by Nyrstar will repair a balance sheet that has been severely impacted by falling commodity prices, so options and flexibility on timing are limited. The deal, which has significant backing from major shareholder Trafigura, is set to be launched following the release of the company’s full-year numbers on February 4. (Reporting by Gareth Gore, with additional reporting by Owen Wild, Stephen Lacey, Sudip Roy and Laura Benitez; Editing by Matthew Davies, Ian Edmondson)