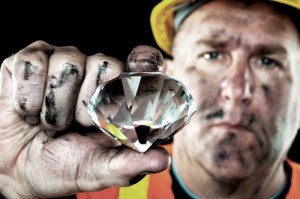 Montréal-based Stornoway Diamond Corp (TSX:SWY) has entered into an unsecured non-revolving bridge credit facility of up to $20 million with Ressources Québec, a subsidiary of Investissement Québec, the company’s largest shareholder. Proceeds of the facility will be used for the development of the Renard Diamond Project in the James Bay region of north-central Québec, and for general corporate purposes. Stornoway has also been backed by the Fonds de solidarité des travailleurs du Québec FTQ.

MONTREAL, QUEBEC–(Marketwired – Oct. 2, 2013) – Stornoway Diamond Corporation (TSX:SWY) is pleased to announce that it has entered into an unsecured non-revolving bridge credit facility of up to $20 million with Ressources Québec, a subsidiary of Investissement Québec, Stornoway’s largest shareholder, through its indirect wholly-owned subsidiary Diaquem Inc. (the “Lender”). The proceeds of the facility will be used in connection with the development of the Renard Diamond Project and for general corporate purposes, including costs relating to Stornoway’s ongoing project financing activities.

Matt Manson, Stornoway’s President and CEO, stated: “This credit facility is intended to provide Stornoway with good funding flexibility as we pursue our project financing activities and begin the ramp-up to the capital programs anticipated at Renard in 2014 and 2015. We are particularly pleased to acknowledge the continued and constructive support of our major shareholder, Investissement Québec, in the development of this important new Québec mining project. With major regulatory authorizations in hand and the Renard Mine Road now open for construction traffic, Stornoway’s primary objective is the timely conclusion of our principal project financing arrangements.”
Under the facility, the Lender will loan up to an aggregate amount of $20 million to Stornoway in two tranches, an initial tranche of $10 million which is expected to be made available on or about October 2, 2013 and a second tranche of up to $10 million, each of which will bear interest at 12% per annum and be repayable on March 28, 2014. The Lender has the discretion to determine whether to fund the second tranche and, if so, the specific amount. A commitment fee equal to 1% of the amount funded under each tranche is payable by Stornoway.

Stornoway will have the right to satisfy up to 50% of the interest payable on the aggregate of the amounts loaned to Stornoway pursuant to the facility by issuing to the Lender common shares of Stornoway at an issue price of 95% of the volume weighted average price of such shares as of the interest payment date, while the remaining portion of interest payable on such amounts will be paid in cash. The credit agreement contains additional representations, covenants, commitments and funding conditions customary for a facility of this nature.

The Renard Diamond Project is located approximately 250 km north of the Cree community of Mistissini and 350 km north of Chibougamau in the James Bay region of north-central Québec. In November 2011, Stornoway released the results of a Feasibility Study at Renard, followed by an Optimization Study in January 2013, which highlighted the potential of the project to become a significant producer of high value rough diamonds over a long mine life. Probable Mineral Reserves as defined under National Instrument (“NI”) 43-101 stand at 17.9 million carats. Total Indicated Mineral Resources, inclusive of the Mineral Reserve, stand at 27.1 million carats, with a further 16.9 million carats classified as Inferred Mineral Resources, and 25.7 to 47.8 million carats classified as non-resource exploration upside. All kimberlites remain open at depth. Pre-production capital cost stands at an estimated C$752 million, with a life of mine operating cost of C$57.63/tonne giving a 67% operating margin over an initial 11 year mine life. Readers are referred to the technical report dated December 29th, 2011 in respect of the November 2011 Feasibility Study for the Renard Diamond Project, and the technical report dated February 28th, 2013 in respect of the January 2013 Optimization Study, for further details and assumptions relating to the project.

About Stornoway Diamond Corporation
Stornoway is a leading Canadian diamond exploration and development company listed on the Toronto Stock Exchange under the symbol SWY and headquartered in Montreal. Our flagship asset is the 100% owned Renard Diamond Project, on track to becoming Québec’s first diamond mine. Stornoway is a growth oriented company with a world class asset, in one of the world’s best mining jurisdictions, in one of the world’s great mining businesses.

On behalf of the Board

This press release contains “forward-looking information” within the meaning of Canadian securities legislation and “forward-looking statements” within the meaning of the United States Private Securities Litigation Reform Act of 1995. This information and these statements, referred to herein as “forward-looking statements”, are made as of the date of this press release and the Company does not intend, and does not assume any obligation, to update these forward-looking statements, except as required by law.
Forward-looking statements relate to future events or future performance and reflect current expectations or beliefs regarding future events and include, but are not limited to, statements with respect to: (i) the amount of mineral resources and exploration targets; (ii) the amount of future production over any period; (iii) net present value and internal rates of return of the mining operation; (iv) assumptions relating to recovered grade, average ore recovery, internal dilution, mining dilution and other mining parameters set out in the Feasibility Study or the Optimization Study; (v) assumptions relating to gross revenues, operating cash flow and other revenue metrics set out in the Feasibility Study or the Optimization Study; (vi) mine expansion potential and expected mine life; (vii) expected time frames for completion of permitting and regulatory approvals and making a production decision; (viii) the expected time frames for the construction of a mining grade road by Stornoway and completion generally of the Route 167 extension and the financial obligations or costs incurred by Stornoway in connection with such road extension; (ix) future exploration plans; (x) future market prices for rough diamonds; and (xi) sources of and anticipated financing requirements. Any statements that express or involve discussions with respect to predictions, expectations, beliefs, plans, projections, objectives, assumptions or future events or performance (often, but not always, using words or phrases such as “expects”, “anticipates”, “plans”, “projects”, “estimates”, “assumes”, “intends”, “strategy”, “goals”, “objectives” or variations thereof or stating that certain actions, events or results “may”, “could”, “would”, “might” or “will” be taken, occur or be achieved, or the negative of any of these terms and similar expressions) are not statements of historical fact and may be forward-looking statements.

Forward-looking statements are made based upon certain assumptions and other important factors that, if untrue, could cause the actual results, performances or achievements of Stornoway to be materially different from future results, performances or achievements expressed or implied by such statements. Such statements and information are based on numerous assumptions regarding present and future business strategies and the environment in which Stornoway will operate in the future, including the price of diamonds, anticipated costs and Stornoway’s ability to achieve its goals. Certain important factors that could cause actual results, performances or achievements to differ materially from those in the forward-looking statements include, but are not limited to: (i) required capital investment and estimated workforce requirements; (ii) estimates of net present value and internal rates of return; (iii) receipt of regulatory approvals on acceptable terms within commonly experienced time frames; (iv) the assumption that a production decision will be made, and that decision will be positive; (v) anticipated timelines for the commencement of mine production; (vi) anticipated timelines related to the construction of a mining grade road by Stornoway and completion generally of the Route 167 extension and the impact on the development schedule at Renard; (vii) anticipated timelines for community consultations and the impact of those consultations on the regulatory approval process; (viii) market prices for rough diamonds and the potential impact on the Renard Project’s value; and (ix) future exploration plans and objectives. Additional risks are described in Stornoway’s most recently filed Annual Information Form, annual and interim MD&As, and other disclosure documents available under the Company’s profile at: www.sedar.com.
By their very nature, forward-looking statements involve inherent risks and uncertainties, both general and specific, and risks exist that estimates, forecasts, projections and other forward-looking statements will not be achieved or that assumptions do not reflect future experience. We caution readers not to place undue reliance on these forward-looking statements as a number of important risk factors could cause the actual outcomes to differ materially from the beliefs, plans, objectives, expectations, anticipations, estimates, assumptions and intentions expressed in such forward-looking statements. These risk factors may be generally stated as the risk that the assumptions and estimates expressed above do not occur, including the assumption in many forward-looking statements that other forward-looking statements will be correct, but specifically include, without limitation, (i) risks relating to variations in the grade, kimberlite lithologies and country rock content within the material identified as mineral resources from that predicted; (ii) variations in rates of recovery and breakage; (iii) the greater uncertainty of exploration targets; (iv) developments in world diamond markets; (v) slower increases in diamond valuations than assumed; (vi) risks relating to fluctuations in the Canadian dollar and other currencies relative to the US dollar; (vii) increases in the costs of proposed capital and operating expenditures; (viii) increases in financing costs or adverse changes to the terms of available financing if any; (ix) tax rates or royalties being greater than assumed; (x) results of exploration in areas of potential expansion of resources; (xi) changes in development or mining plans due to changes in other factors or exploration results of Stornoway; (xii) changes in project parameters as plans continue to be refined; (xiii) risks relating to receipt of regulatory approvals or the implementation of the existing Impact and Benefits Agreement with aboriginal communities; (xiv) the effects of competition in the markets in which Stornoway operates; (xv) operational and infrastructure risks; (xvi) technical, environmental, permitting and execution risk relating to the construction by Stornoway of a mining grade road forming part of the Route 167 extension, (xvii) the additional risks described in Stornoway’s most recently filed Annual Information Form, annual and interim MD&A, and Stornoway’s anticipation of and success in managing the foregoing risks. Stornoway cautions that the foregoing list of factors that may affect future results is not exhaustive.

When relying on our forward-looking statements to make decisions with respect to Stornoway, investors and others should carefully consider the foregoing factors and other uncertainties and potential events. Stornoway does not undertake to update any forward-looking statement, whether written or oral, that may be made from time to time by Stornoway or on our behalf, except as required by law.